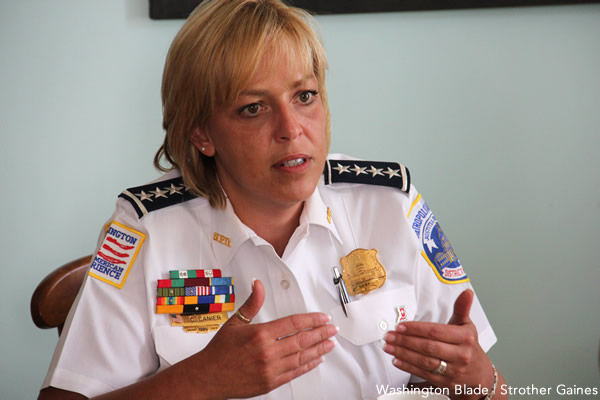 D.C. Chief of Police Cathy Lanier discusses the formation of the new task force during
an interview with the Washington Blade. Photo: Strother Gaines/Washington Blade

Last month, the district mayor and police chief launched a task force that will evaluate how the Metropolitan Police Department investigates and reports hate crimes, particularly those targeting the LGBT community. The task force aims to identify and strengthen investigation weaknesses and build better police-community relations.

Recent hate crimes include   the late June stabbing of a 16-year-old boy, throughout which “derogatory, homophobic language” was used, according to district police. The three assailants have been charged on the single count of assault with a dangerous weapon, in which a hate crime designation is included.

“The District of Columbia is open and welcoming to people of all nations, races, sexual orientation, and gender identity,” said Deputy Mayor Paul Quander, who met with the LGBT community on June 19 to announce the task force. “We want all individuals—whether they are people in those communities or those who might commit a hate crime—to know that intolerance and hate crimes have no place in our vibrant city.”

The task force comes in response to criticism of hate crime investigations. A June 29 public oversight hearing, held by the Committee of the Judiciary, brought some of these issues to light.

The task force will be assisted by the Anti-Defamation League, the Human Rights Campaign, National Center for Transgender Equality, the Leadership Conference for Civil and Human Rights and two academic experts on hate violence—Jack McDevitt of Northeastern University and Jim Nolan of West Virginia University.