COPS Office and NIOT : Why reporting hate crimes matters | Not in Our Town
Skip to main content 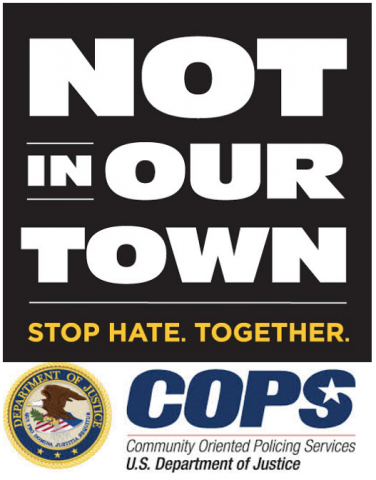 Not In Our Town and the COPS Office of the U.S. Department of Justice have once again collaborated to raise awareness within the law enforcement community of the hate crimes reporting gap. COPS Office Director Ronald L. Davis and Not In Our Town CEO and Executive Director Patrice O'Neill have co-authored an article highlighting the problems raised by the hate crimes reporting gap and practical solutions to combat the under reporting. This article appears in the May 2016 edition of The Police Chief, the official publication of the International Association of Chiefs of Police.

To see this article and as well as other resources we offer to those working in law enforcement, please click here.

Below is an excert from the article:

How many hate crimes have occurred in the community during the past year? Many sheriffs or chiefs of police would probably say that there have been few, if any, in their communities. However, they would probably be wrong. Hate crimes are overwhelmingly underreported—by both victims and law enforcement officers. Yet, despite the fact that they are largely unacknowledged, these crimes and their associated problems—fear, social unrest, and alienation—occur at an alarming rate.1 What’s more, the very fact that hate crimes are underreported not only encourages such incidents, but also poisons relations between law enforcement and the communities they serve.

There are compelling reasons to seek accurate reporting of hate crimes:

If one goes by the numbers, hate crimes appear to be quite rare and almost non-existent in some U.S. states. Alabama, for instance, reported only six hate crimes in 2013. Wyoming reported one for the same period, and Mississippi reported four.2 According to recent Federal Bureau of Investigation (FBI) statistics, about 87 percent of law enforcement agencies in the United States reported no hate crimes in 2013.3 The old cliché, “statistics lie,” holds especially true in the case of hate crimes. In 2011, the total number of incidents throughout the United States reported to the FBI was 6,200, with about 7,000 people victimized. However, a recent study by the Department of Justice’s (DOJ’s) Bureau of Justice Statistics (BJS) showed that more than 250,000 people in the United States over the age of 12 years old were victimized each year from 2003 through 2011, either through violent or property crimes.4 Why the discrepancy between the reported numbers and the study? The numbers from the BJS statistics come from the National Crime Victimization Survey (NCVS), considered the most accurate survey of its kind. Unlike the FBI Uniform Crime Reporting (UCR) Hate Crime Statistics, which is a voluntary reporting system that many jurisdictions don’t use and which can encompass only crimes that are reported, the NCVS data are collected from a United States–wide representative sample of approximately 90,000 households. Those in the representative sample, surveyed twice a year, provide responses on a wide variety of crimes, including those not reported to the police.5

The NCVS findings are shocking, but even more alarming are the statistics on apprehension. Between 2003 and 2006, suspects were arrested in just 10 percent of hate crimes. Between 2007 and 2011, that number decreased to a mere 4 percent.6 Clearly, hate crimes are on the rise, while reporting is on the decline. What is not always clear are the complex reasons for this decline. One challenge to reporting these crimes is defining them. Unless there is bias involved, a person killing the boss who fired him or her is not a hate crime, no matter how high the degree of animosity. According to the Hate Crime Statistics Act of 1990, hate crimes are “crimes that manifest evidence of prejudice based on race, gender or gender identity, religion, disability, sexual orientation, or ethnicity.”7

A Threat to the Entire Community

What makes these crimes so pernicious is that their impact spreads far beyond the direct victims and their families. Because hate crimes threaten everybody who worships, looks, speaks, or shares the same beliefs as the victims. And if the bias against these groups is not condemned by law enforcement, distrust and resentment thrive in the victims’ communities, undermining efforts to maintain peace and security. When it goes unacknowledged, a hate crime is like a cancer that spreads until it has killed off the healthy cells and invaded the entire body. Ultimately, the toxicity of these crimes threatens an entire society, undermining core beliefs and constitutional freedoms. Police chiefs have the opportunity to control, if not entirely cure, this sickness. But the first step—accurate reporting—is often overlooked, which is a serious problem since it is impossible to prevent what is not known or admitted to exist. Though anyone can become the victim of a hate crime, reports indicate that the most frequent targets are African Americans; Jews; and, increasingly, Muslims, as well as individuals who are thought to belong to these groups. It is estimated that there were more than 700 incidents targeting people who appeared to be Arab in just the nine weeks following 9/11.8 In addition, the NCVS findings indicate that the number of crimes motivated by religious bias have more than doubled from 10 percent between 2003 and 2006 to 21 percent between 2007 and 2011.9 Members of the LGBT community are often victimized as well. Crimes motivated by bias against Hispanics have also risen, according to research by BJS.10 The physically and mentally disabled are vulnerable, too. Nobody is truly immune.

Haters and extremists are a varied lot, and they may hold grudges against any group or community, including law enforcement. According to the Anti-Defamation League, 30 police officers were shot, 14 of them fatally, by domestic extremist groups between 2009 and 2013.11 White supremacist and anti-government extremist groups were responsible for all but one of these shootings. On the other hand, about 18 percent of crimes reported as racially motivated in 2007 resulted from anti-white bias.12 There are also “patriot” groups that advocate violence against people whose political views differ from theirs, and individuals who attack people whom the attackers think belong to a community they despise, whether or not that is true. A former Ku Klux Klan leader who killed three people outside a Jewish Community Center and retirement home in April 2014, was targeting Jews, but the victims were actually Methodists and Catholics.13 In 2012, a gunman attempted to kill all the members of the Family Research Council, a conservative group that opposes gay marriage.14 It might be ironically said that hate crime is an “equal opportunity” crime.

To read the rest of this article, click here.

Click here to check out the resources we have available for those working in law enforcement.