Community Remembers Lucero, Seeks Peace | Not in Our Town
Skip to main content 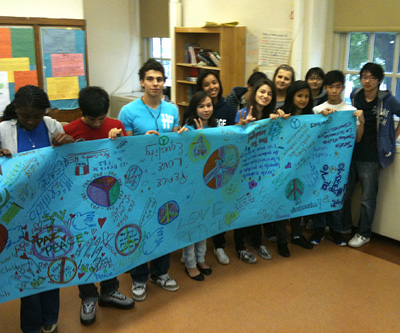 Two years after a hate crime rocked the small Long Island village of Patchogue, N.Y., the community will come together to remember local resident Marcelo Lucero and to pledge to work toward peace, harmony, and unity in the wake of Lucero's violent death.

Lucero's younger brother, Joselo Lucero, is organizing a vigil on Sunday, Nov. 7 and has invited youth to create positive messages for a Wall of Hope at the ceremony. Patchogue mayor Paul Pontieri and the Village Trustees will be participating in the event.

Educator Julie Mann rallied her students at Newcomers High School to create a banner in tribute to Marcelo Lucero. For Mann and the students in her Human Rights class, a Not in Our Schools group, Lucero's death hit close to home. The high school is located approximately 50 miles from Patchogue, where seven local teenagers attacked Lucero. The class is also comprised of all new immigrants.

Photos of last year's vigil honoring Marcelo Lucero on the one-year-anniversary of his death.

"They are deeply saddened by Marcelo's death and wanted to support the Lucero family," said Mann.

Mann adds that her students hope for justice and equality for immigrants. Their blue banner contains messages offering sympathies and calling for equality in both English and Spanish. 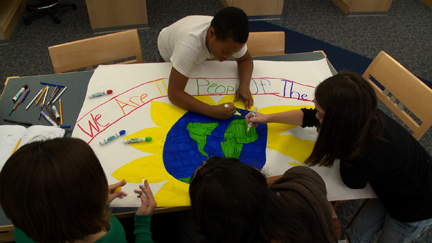 In addition to the Wall of Hope and ceremony, the Not in Our Town crew will be filming and  taking a community portrait. Community members and supporters are invited to join the portrait following the service. An Embracing Our Differences art exhibit is also on view at Patchogue's South Ocean Middle School and the Long Island Immigrant Alliance is holding a blood drive on the following day, Nov. 8, in honor of Marcelo Lucero.

Not In Our Town, "2009 Vigil: One Year After Killing, Patchogue Remembering and Moving Forward"

In:
Patchogue
Not In Our Schools
vigil
Marcelo Lucero
Joselo Lucero