Chabad rabbi whose home was targeted by arson: ‘We have to counter hate with love’ | NIOT Blog
Skip to main content

Chabad Rabbi Whose Home Was Targeted by Arson: ‘We Have to Counter Hate With Love’

This article first appeared in The Springfield Republican/MassLive.com and was reprinted with permission. 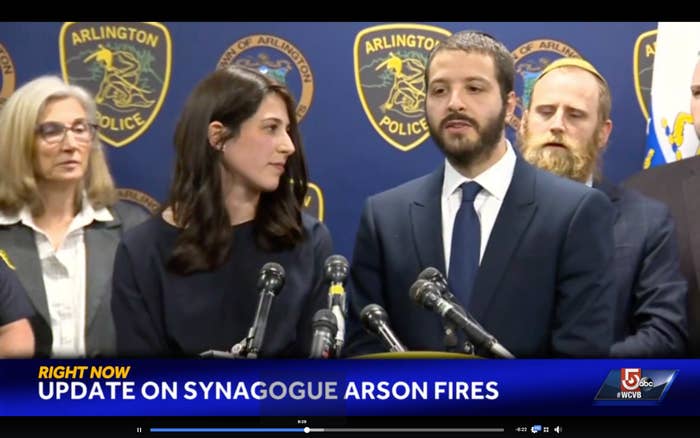 The two rabbis whose homes and Jewish centers in Arlington and Needham were targeted by apparent arson attacks said they will not be deterred from their work of providing a Jewish community to anyone who seeks one.

Rabbi Mendy Krinsky of the Chabad Jewish Center in Needham, said, “We have to counter any hate with love, and do more and spread more light.”

No one was injured in any of the fires, which were confined to the exteriors of the buildings.

Law enforcement say they cannot confirm yet whether the fires are connected, but they are all suspicious and are being investigated as possible hate crimes.

Chabad houses are Jewish institutions where a couple affiliated with the Orthodox Chabad movement will set up a community center and offer services like prayers, Sabbath meals, Jewish communal events and Hebrew schools. The buildings targeted by the fires were also homes for the Chabad families.

Rabbi Avi and Luna Bukiet spoke to reporters at a press conference at the Arlington Police Department. They did not take questions.

“We have committed our lives to spreading the universal message of light and love,” Luna Bukiet said. “This will not deter us. If anything, we will double down on our efforts to bring more goodness into the world and create a better world for all of our children.”

Avi Bukiet, who also teaches at a Jewish school in Watertown, said the arsonist has targeted not just the Jewish center, but his family. “We are hurting because of this,” he said. But he said his family has received an outpouring of support from both the Arlington and the Jewish communities.

Krinsky spoke to a reporter by phone on Friday. He said the fire is “concerning” but thankfully his family is safe. He said the family is asking people “to do extra good deeds, acts of goodness and kindness to combat the hate we’re probably dealing with.”

“It’s very unfortunate that these things are happening but…the response has to be more goodness in the world,” Krinsky said.

Krinsky said the apparent arson will “get us to do more and be more visible and do more mitzvot (good deeds) and help more people grow in their Judaism.”

A $20,000 reward is being offered for information leading to the arrest or conviction of the person or people responsible for the fires. A federal and state Joint Terrorism Task Force as well as other state and federal agencies are involved in the investigation.

“These are extremely concerning incidents in which innocent families lost that all-important sense of safety and security that the home is meant to convey,” said Arlington’s acting police chief Julie Flaherty.

Robert Trestan, executive director of the Anti-Defamation League’s New England office, said he hopes the investigation will be quickly resolved “to restore a sense of safety and security among the community.” “This is scary and serious, because they’re not just houses of worship, these are places where people live,” Trestan said.

Friday night and Saturday are the Jewish Sabbath, when Jews will gather at synagogues and Chabad houses to worship.

Both Bukiet and Krinsky said they will not cancel any scheduled programming.

Trestan said he has gotten calls from some Chabad houses who plan to ask for additional police protection.

Rabbi Shalom Prus, the director of a Chabad in Newton, said he has been in close contact with law enforcement, and the police will beef up patrols during the Sabbath. He said the organization is constantly improving its security protocols.

“We’re thankful for law enforcement and confident that we’ll be secure,” Prus said.