The Bus, This Time: How One Town is Mobilizing to Take on Bullying | Not in Our Town
Skip to main content

The Bus, This Time: How One Town is Mobilizing to Take on Bullying

It’s hard not to cry, or feel like you’ve been punched in the gut while watching the ten minutes of horrendous bullying and harassment that Upstate New York grandmother and school bus monitor was subjected to by a group of middle school students.

Charles Blow’s recent New York Times column, "Bullies on the Bus," cites the incident as “a remarkably apt metaphor for this moment in the American discourse in which hostility has been drawn out into the sunlight. Those boys are us, or at least too many of us: America at its ugliest. It is that part of society that sees the weak and vulnerable as worthy of derision and animus, ” says Charles Blow.
Hand wringing is not in order here, but action is. Marshalltown, Iowa is taking the lead in creating community wide actions against bullying and intolerance that directly confront the hostility ”now in the sunlight.” Their actions can provide a model for all of us who want to do something to stop bullying—wherever it occurs.
Marshalltown Republican Publisher Mike Schlesinger and his team at the local newspaper were disturbed by the open hostility expressed in the paper’s online comment section and wanted to do something to address it. Then, reports of a gay teen suicide in Sioux City, Iowa raised the stakes. People in Marshalltown did not want bullying to have tragic consequences in their town. The newspaper’s editorial team took the lead in gathering civic stakeholders for an action plan. 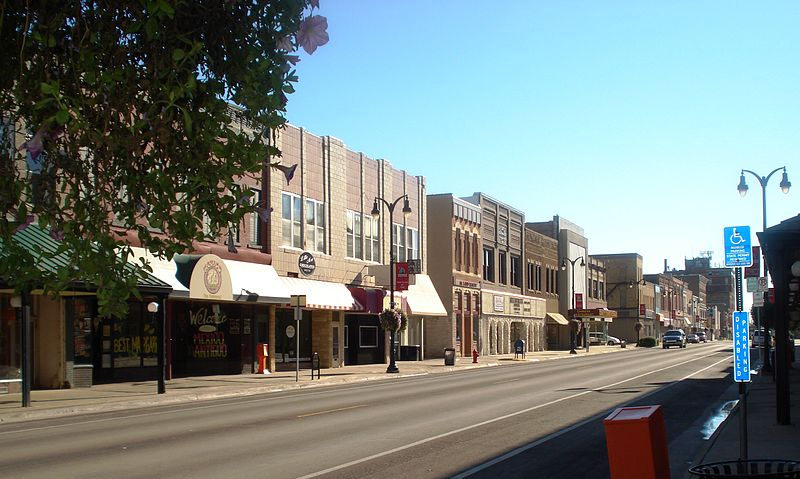 The main street of Marshalltown, where residents have started a Not In Our Town anti-bullying campaign.
“Our newspaper has recently started an anti-bullying committee made up of community leaders, including the mayor, school superintendent, YMCA-YWCA director, hospital CEO, dean of the college, police chief and several others,” Schlesinger said in an email. “Our goal is to raise community awareness of all forms of bullying and eliminate them from our town. Our group would like to join 'Not In Our Town' and learn more about out what other towns are doing to help stop bullying." 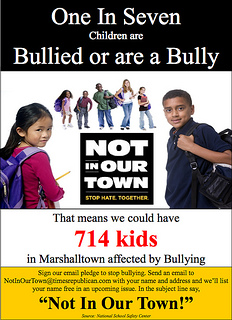 Marshalltown’s NIOT campaign includes plans to bring in “Matthew Shepard's mother, Rachel Scott's father and some CEOs with expertise in workplace bullying. Our college plans on bringing in the movie Bully and show it to school children and families. Also, we have a large Hispanic population and we plan on bringing in speakers to encourage inclusiveness and create an open welcoming city,” said Schlesinger as he outlined plans for the year long series of events in this central Iowa community.
We want Karen Klein and every other victim of bullying and hate to know that there are people across the country that are working to stop the harm. There are hundreds and thousands of people who want to stand up and take action. Marshalltown, thank you for your shining light. We will be following your actions and sharing them so others can follow your lead.
In:
campaign
Not In Our Town
Bullying
marshalltown
iowa
Karen Klein
Sioux City
bus monitor

Im a middle school student at one of the best schools in Fort Collins and the people are suppose to be really nice and smart but they are some of the meanest people I have met. They make fun of me because Im not athletic and Im not the smartest and Im just different and Im allways happy at school when I try. I just take it all in and I am just really depressed all the time and it caused me to lie. Im not lying anymore :) but Im more depressed than ever.

Bai1234, thank you for speaking up about your experience being bullied. Please look at our Not in Our School Resources for help in your struggle against bullying:

Remember that you have the full support of your friends, family, and Not in Our School

I wish that I had seen your post a year ago when you posted it. I hope that you made it through the storm. You are so right when you said that people can be mean, even though they may be smart and seem to be nice. I hope that you are doing well.

I am thinking about you.

I am thinking about you. I hope things are better.