Aurora Mourns, Comes Together After Shooting | Not in Our Town
Skip to main content

Aurora Mourns, Comes Together After Shooting 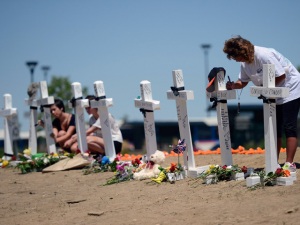 Mourners write messages to the victims on the 12 respective
crosses that line the street across from the crime scene.
Photo: Kevork Djansezian/Getty Images

In the midst of shock and mourning over the recent tragedy, the Aurora, Colo. community proves to be a site of immense strength.

Twelve crosses now stand near the movie theater where suspected shooter James Holmes opened fire on a full audience at a showing of the new Batman movie, The Dark Knight Rises. The site quickly filled with flowers, candles, and other gifts as streams of people came to pay their respects to the 12 deceased and 58 wounded in the July 20 shooting.
Individuals and groups are offering resources and support systems in order to cope and heal. Thousands attended a Sunday vigil organized by local religious and civic leaders. Local pastors and Colorado Gov. John Hickenlooper read the names of those lost. After each name, the crowd repeated, “We will remember.”
Video: Vigil for Aurora, Colo. Theater Shooting Victims Draws Columbine Survivor from Huffington Post

"Colorado is not a violent place, but we have some violent people. We are a strong and resilient community, and we will lean on each other in the days, weeks and months to come," Aurora Congressman Ed Perlmutter told The Hill.

President Obama traveled to Aurora earlier that day to meet with the victim’s families. Batman actor Christian Bale, along with his wife, visited seven survivors of the shooting at the Medical Center of Aurora on Tuesday.
Colorado’s historical memory of violence situates the shooting 13 years after the massacre at Columbine High School, 20 miles away from Aurora. Columbine survivor Anne Marie Hochhalter attended the Sunday vigil and fellow Columbine survivors are reaching out to Aurora’s survivors over the phone and on Facebook.
Online & Victim Support 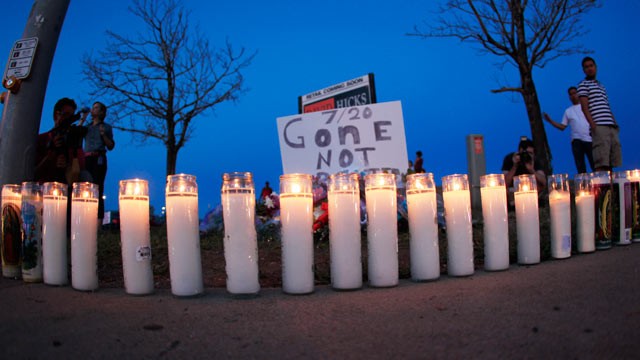 At a makeshift memorial for the shooting victims, community members light candles
on the sidewalk for the victims. Photo: David Zalubowski/AP

Online, people across the country are offering support, prayers, and fundraising efforts. Shooting survivor Cody Hickman created the Survivors Of the Aurora Theater Shooting Facebook page “for others to connect, and share their support and stories.”

“The Aurora theater shooting affected a lot of lives, and coming together as a community, be it local or global, is one of the most important tools for getting through this ordeal,” Hickman wrote.

The Aurora Theater Shooting Facebook page offers tributes and resources submitted by both moderators and members in one place. In fact, there have been so many requests from those looking to volunteer that the creators were prompted to make a sister page strictly for volunteer organizing.
The Denver Channel reports that GivingFirst.org has recieved almost $2 million in donations, while local Calvary Chapel is offering financial assistance for the victim’s funerals in addition to free grief counseling services. The Colorado Organization for Crime Victims is also helping victims and their families to access funding for funerals in addition to compensation. Their website urges visitors to “like” their Facebook page for the most up to date information.
On a more personal level, friends have come together to raise funds for shooting victims and new father, Caleb Medley. After being shot in the eye, Medley remains in a coma in intensive care. His friends have raised more than $70,000 to help with a medical bill that could add up to $2 million without insurance.
Another victim, Rebecca Wingo, was fatally wounded, leaving behind two daughters, 9 and 5 years old. People have pledged more than $15,000 to support Wingo’s daughters and family.
"It's the acts of kindness and compassion, bravery and selflessness that defines who we are," Mayor Steve Hogan said. "Our hearts are broken. Our community is not."
—Rae Henaghan
In:
victim support
Shooting
colorado
vigil
facebook
Aurora
tragedy
The Dark Knight Rises
Batman
donations
funds
mourning