By Tom O’Mara, Shasta County Citizens Against Racism
The genesis of the Shasta County Citizens Against Racism (SCCAR) was an incident that occurred in the summer of 1988. In Caldwell Park, the major park then in the city of Redding, a black male and white female standing together were targeted. Someone in a vehicle driving by them yelled racial epithets. Then a gunshot was fired. Fortunately, no one was injured. The case went to trial, and a few local residents troubled by the incident, including SCCAR founding member Fran Brady, longtime civil rights activist Isaac Lowe (featured in the documentary Not In Our Town Northern California,) and a local publisher, David Ledger, decided they would start going to the court hearings as a sort of silent vigil, and because they didn’t want what happened to be swept under the rug.
The case resulted in a conviction and this core group of locals felt like there were enough racially biased incidents happening in Redding that they wanted to form something that was more ongoing and official. So they named themselves Shasta County Citizens Against Racism. (Several years later the group sought and achieved non-profit status.)
I knew Fran Brady from working together, and as SCCAR went on and my relationship with her developed, I became involved. In the early years, a big function of the group was keeping law enforcement on task and getting them to comply with laws like the 1994 Bane Act, which required mandatory reporting of hate crimes. So we were sort of a watchdog presence in the community when a hate crime occurred.
I remember one case involving a man who walked through a predominantly Southeast Asian neighborhood of Redding with a baseball bat or a two by four, breaking windshields and one living room window, and yelling things like “Go back to Asia within two weeks,” “Learn English” and “You’re Not Welcome Here.” We learned that the case was not referred by the Redding Police Department to the District Attorney’s office as a hate crime. I and two other SCCAR members went down to the police department. We met with a lieutenant and made him aware that we were aware of California Penal Code 422.6, expected the police to uphold it, and wanted to know why this particular case was not referred as a hate crime. We were told that the officer responding to the scene was a new recruit from another law enforcement agency who hadn’t been trained in the same way that Redding Police Department recruits were, and we were assured they would update their training of new hires. There were a number of other cases like this that we became involved in – some of them involved cases that were referred, but then not prosecuted by the D.A., and some of them involved incidents that the Sheriff’s Department responded to. 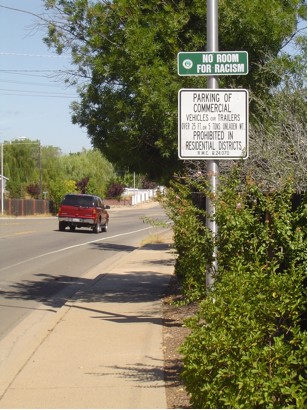 I remember when I got involved with Redding’s “No Room for Racism” sign campaign. We wanted the city and county to endorse it and approve signs with the message to be placed around town and at the city limits. One of the first things we did was start a petition. We had about 400 signatures that we presented to the Board of Supervisors, and the first signatures on the petition were by the police chief and the sheriff. (The City of Redding has posted five "No Room For Racism" signs with the city seal, and there are now a total of 75 similar signs that have been posted by other communities at area school sites, hospitals, and other facilities.)
I’ve learned there is a shared interest with law enforcement in the betterment of and the safety of the community. And I think law enforcement understands that if they can do something on the preventative end, it’ll help them and help the community. So I encourage people to initiate contact with law enforcement, whether it’s a police captain or the chief of police or a beat officer, and to share their concerns and ask if there is anything law enforcement may be able to do to be of help.
Tom O’Mara is media spokesperson for the Shasta County Citizens Against Racism. He is retired from a variety of social service and violence prevention jobs in the Redding area, and counts his employment at Glide Memorial Church in San Francisco as invaluable organizing experience. He and his wife Alice Wilkinson are owner-builders of a solar home in Olinda, CA. Tom is a graduate of UC Berkeley, which followed a brief stint as a basketball player for the University of Notre Dame.
Local Lessons:
Law Enforcement in the Fight Against Hate
NIOT:
law enforcement
redding
shasta county
1994 bane act
hate crime reporting
sccar
california penal code 422.6
redding police department
sign campaign

I am a white female and my boyfriend is a black male.  We live in a small community in Wetzel County.  He is the only black citizen in our town.  Needless to say, we are getting harrassed over and over again by a deputy sheriff in our town.  He doesn't like black people and he also doesn't like black/white relationships.  I am almost 9 months pregnant and having complications, which he has been made aware of this, but he continues to harrass us.  This is causing me more health problems and concerns. I notified his superior the sheriff but nothing has been done.  What more can we do?

I'm sorry that I did not see the above posting sooner, and I would need further details about the harassment mentioned, but my basic response is that you may have to keep climbing the ladder, even all the way to the state level, until you get an answer (or change in behavior) you are satisfied with.

For the sake of your baby

For the sake of your baby and the sanity of your relationship you should consider moving to a safer environment, the Sheriff is not going to relent, ignorance is difficult to change, I realize that this is probably not what you wanted to hear but it is the reality of the situation, in the early seventies I was in the same position, I married a White girl, I am a black man, it was a different time then I or we could have been killed, but we loved each other and were ready for the fight,

I developed a Community Action Program to help the people that lived in the project that we lived in, I was fresh out of the Military and had a hell of a time finding a job so in the interim I put all of my efforts into this CAP Program, I made many friends and people that had never held their heads up found a new pride, but I also made many enemies most among the town Polititians and Town Fathers, long story short I had to move my Family to keep them safe, the threats were Palpable,

We didn't move far but we found safety and I finally found work and soon bought our first home, There will be people near and around you that will not tolerate hate and racism, you have to find them, but in the meantime find a safe place for yourself your boyfriend and your Baby, don't hesitate, don't feel like you are running away, understand that you are protecting yours

Police Departments and Citizens as allies

I had the opportunity to work as a facilitator bringing citizen groups and police officers involved in "community policing" together.  Police officers usually show up "after the fact" when an incident has occurred, or they are perceived as "the enemy" to many citizens--due to negative characterizations and stereotypes--and not called.  When groups of citizens and officers convened (perhaps from the "Hate Crimes Unit" of a department if possible)--starting small at first--they sat on both sides of the room in a we/they configuration.  When activities were done that had them identify what is important to them as citizens in a community and police officers in a community, members of each group were put in mixed groups to talk about the comments (anonymously written)--something unforeseen occurred: both groups had mentioned many of the same concerns/interests.  When they discussed why that might be so, they built upon their discussions to agree upon the fact that misperceptions of each other occur, that they could be allies if they had common identified goals, and that there were certain activities that develop trust that had to be developed.  It was as basic as "what does trust look like" and then having both groups speak from experience (with guidelines about how to keep respect for each other).   Several sessions were held.  People were encouraged to "bring a friend next time."  Some people never returned.  The group doubled in 3 sessions--either out of curiosity, disbelief, trust, ownership, nothing good on television that night (it happens), or changing perceptions about how citizens and police can become allies.  This takes time, as all worthwhile endeavors do, but it has to begin with dialogue and activities which promote that.  It's called risk-taking and it can be scary at first--but ultimately exciting to see the power of ideas multiply.

Thanks for sharing this

Thanks for sharing this incredible story! Indeed, as we've seen in many of the communities in the Not In Our Town movement, the collaborative work between the police and community is essential in combating hate and implementing preventative measures.

What I like about your comment is you discuss the need for trust and recognizing misconceptions between citizen groups and police officers and how this relationship takes time and is worthwhile for the future safety of the community. Where are you now? Has your group put measures in place to deal with hate incidents before they occur or have a plan in place for when they (unfortunately) do?