When residents of , learned that the Aryan Nations was planning a rally at the , spewing their hate on the very spot where Abraham Lincoln delivered his most stirring defense of American democracy, they knew they couldn’t ignore it.

The town had experience standing up to hate. In 2006 the Ku Klux Klan visited , and a coalition of city leaders, faith groups and civic organizations organized an all-day festival of music, sports and inspiration to draw attention away from the Klan and bring the community together. Hundreds of schoolchildren took part in the games, music and art projects.

This time, some obstacles stood in their way:

In 2006, the town had an entire summer to plan; the Klan arrived in September, when schools were in session; and nothing else was taking place that day.

This time, the town had just six weeks to plan; the rally was scheduled for June 19, when schools are out; and worst of all, more than a dozen other festivals were taking place the same weekend, including the town’s trademark Gettysburg Festival, creating terrific logistical difficulties and making it hard to focus people’s attention.

“We decided not to do another day-long festival,” says Ashley Hayes, hallmark and mission director of the local YWCA, which took the lead in organizing  the town’s response in 2006 and this June. “The Gettysburg Festival was holding its kickoff the same day, and we didn’t want to compete.”

In May of 2010, the YWCA organized the first of six planning meetings for what became the Adams (County) Unity Coalition. A wide group of allies joined the Y, including the for Peace and Justice, the

On Saturday July 19, a mere dozen members of Aryan Nations gathered behind police barricades at the national park, while more than 75 Unity Coalition supporters held a 90-minute rally alongside a major road, holding up signs of love and acceptance, inviting passersby to honk in support of diversity.  The Aryan Nations rally disbanded after less than an hour. 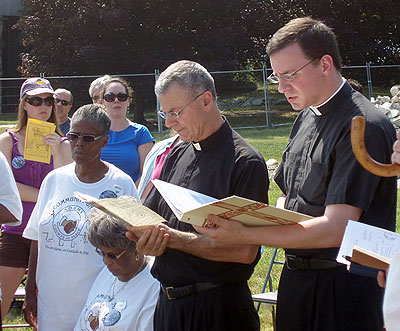 The next day, 100 people gathered on the site of the Aryan Nations meeting to “re-consecrate” the land. Clergy and lay leaders from more than half a dozen faiths offered blessings, and the crowd sang “We Shall Overcome” along with a Spanish translation of the St. Francis prayer.

"The Aryan Nations have desecrated the battlefield, now we will re-consecrate it as hallowed ground,” explained Jan Powers of the Adams County Human Relations Council.

Coalition activists say they were pleased, on the whole, with both events. Here’s their rundown of what they did best, and where they feel they might have done better:

The planning process went smoothly, but could have been more inclusive.

Local police were busy preparing security for the Aryan Nations visit in May and June, Hayes says, and weren’t involved in planning efforts for the unity events, although state and local police provided protection on both days. The city was also not represented in the planning process, but the Pennylvania Human Relations Commission sent staffer Deven Price to every planning meeting and to the June 19 unity rally.

Although the unity events were held at an alternate location from the Aryan Nations gathering, as recommended by the commission, the Department of Justice sent someone to train key participants in non-violent response techniques. That’s important, organizers point out, to ensure a peaceful event—sometimes hate groups try to provoke physical altercations, to generate press coverage and lawsuits.

“We advise communities to organize peaceful unity events at an alternate location,” says Price. “The supremacist group wants protestors there. It gives them attention; it legitimizes them.”

The coalition worked closely with organizers of the Gettysburg Festival, emphasizing that they were not “competing” for audience, and the festival permitted the coalition to set up booths to distribute flyers and other information about ongoing unity efforts and civil rights law.

Finally, inclusiveness was a challenge. The NAACP and Manos Unidas were part of the planning process, representing the African American and Latino communities, but the faces at the unity rally itself were overwhelmingly white, middle-aged and female.

This was a big challenge in , as it is in many communities. One organizer said most of the young people holding signs at the June 19 unity rally were either children of the organizers, or their friends; she admitted this was the coalition’s “greatest weakness.”

Ann Van Dyke has been with ’s Human Relations Commission for 31 years, and since the early ‘90s has been their point person for nearly two dozen communities targeted by hate groups, mostly the Klan and Aryan Nations.

On one hand, she says that unity coalitions can use such visits as community-building exercises. The publicity generated by a hate group’s visit can focus attention on efforts to counteract that hate, drawing people into planned activities and encouraging them to stay involved.

Since the late ‘90s, she says 25-30 unity coalitions formed throughout in response to such unwanted visits. In fact, she points out, “When there isn’t organized hate in your town, people often don’t organize.”

On the other hand, it takes hard work to reach outside one’s comfort zone and attract people who aren’t already involved in anti-hate work—particularly young people.

A supremacist or racist group doesn’t come to a town unless it feels its message might reach some segment of the population – find out who that is, and reach out to them first, Van Dyke suggests. Who are most often the targets of hate speech? Alienated youth, who already feel marginalized. 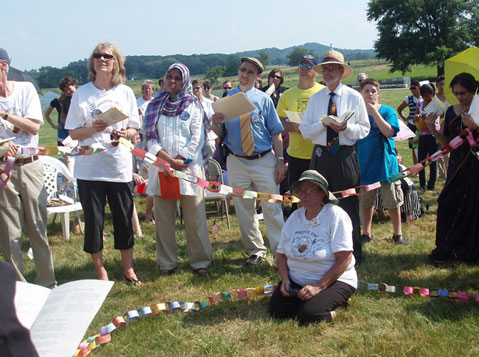 A successful unity campaign has to get to those young people right away, and give them a role in all planned events. Give them the job of pinning unity ribbons on people. Ask them to organize the music for the day. Get them involved physically and emotionally, and make sure it’s not just window dressing. Unity events have to match the hate group’s energy, or young people won’t be attracted. More important, unless they have a key role to play, they won’t stay involved after the hate group leaves town.

“It takes clear intention, and is harder to do than reaching out to adults who are already involved in unity work," Van Dyke says.

Rosie Bolen of the Interfaith Center for Peace and Justice, one of the event organizers, agrees that the coalition could have done a better job reaching out to local youth. “The events we planned were more attractive to older people,” she admits. But she’s not sure what they could have done differently, given the timing, the other festivals going on that same weekend, and the fact that most of the local peace and justice activists are women above the age of 50. “There wasn’t as much energy this time as in 2006.”

Keep unity events far away from the hate group’s gathering

The Adams Unity Coalition managed to do this successfully, which probably contributed to the Aryan Nations decision to disband its rally so quickly. Without a big audience, what’s the point of a hate rally?

But some people did show up to protest the Aryan Nations at the spot where they rallied.  Most were anti-racist youths, who tried to out-shout the supremacists’ message, and countered the AN’s uniforms and swastikas with their own hate-filled messages, something Van Dyke says is counter-productive. One young man wore a tee-shirt that showed Hitler with a gun to his head and the slogan, "Follow your leader." A sign held by another protestor read, "The only good fascist is a dead fascist."  Not surprisingly, the press trained their cameras on them—not the message the unity coalition wanted to get out.

Again, Van Dyke says, it’s precisely these young people that need to be drawn into unity efforts. She spoke with one of the anti-racist activists the night before the rally, and he agreed to keep in touch with her, and offered to invite her to his group’s meeting so she could put her case to the young activists. That’s more useful than simply refusing to work together, she points out.

Sometimes faith groups feel they must show up at the very spot where a hate group is gathering, to witness and proclaim a different message. In such cases, Van Dyke counsels them to seek non-violence training from the DOJ, which the Gettysburg coalition did.

“The real work begins the day after the rally,” Van Dyke points out. As a unity coalition is preparing its response to a hate incident or visit by a hate group, she says, “make sure you’re building a network of people you can work with after the Klan or Aryan Nations goes home.”

That means acknowledging the racial, ethnic or religious divides that exist in your community, exposing them to light, and working honestly to heal them—which city leaders are sometimes hesitant to do. The Aryan Nations often targets tourist towns,and it is those towns, Van Dyke says, that tend to put on the biggest unity events but have the least follow-up.

“Hate is bad for tourism,” she notes. “Talking about intergroup tensions among the locals doesn’t look good. That’s one of the biggest detriments to unity work: wanting to look good.

“Towns  are happy to ask the YWCA to organize a unity event, but are sometimes uncomfortable with asking, ‘why here, why now, in our town?’”

The Unity Coalition in Gettysburg is one of some two dozen across Pennsylvania that are loosely connected via the Pennsylvania Network of Unity Coalitions, a NIOT affiliate. By sharing resources and information, and creating their own unified website, like-minded activists in each city can leverage their power more effectively.

Pennsylvania’s Human Relations Commission is another welcome ally in the struggle for peace and justice in the state. Commission staff  provide advice and personal support to communities facing threats from hate groups, or experiencing intergroup tensions.

In addition, Pennsylvania is one of the few states with an intra-agency task force on civil tensions that  brings together local, state and federal partners as well as some private groups. Other states regularly turn to this task force for advice, and the U.S. Department of Justice considers it one of the most effective in the country.

Words in closing from Ann Van Dyke: “Often when we are helping a town get ready, someone says, just ignore them and they’ll go away. We say, why in the world would you be silent when such a group is speaking in your town? Silence is the welcome mat for hate.

Don’t engage them, but do not permit their message to go unchallenged.”

Thanks to NIOT for posting

Thanks to NIOT for posting our experience. It was so encouraging to see the response from community members to these unity events. We hope others can learn from our story and respond when hate groups visit other towns.

The critical analysis of our Gettysburg Unity event was helpful and will be useful if and when we have to deal with another such "visit" from a white supremacist group.

Video about the Peace Rally

Hello everyone, we were fortunate enough to have a camera crew on site during the peace rally. Adams unity Coalition- thanks for all your great work!

I found this article especially interesting because I recently attended a workshop about Gettysburg.  At one point in the lecture the professor made reference to hate groups using the site for demonstrations, but did not go into much detail.  It was so heartening to hear about the community's reaction to the white supremacist group.