Report: Ferguson Police Response to Protests and Demonstrations | Not in Our Town
Skip to main content

From the report: After-Action Assessment of the Police Response to the August 2014 Demonstrations in Ferguson, Missouri 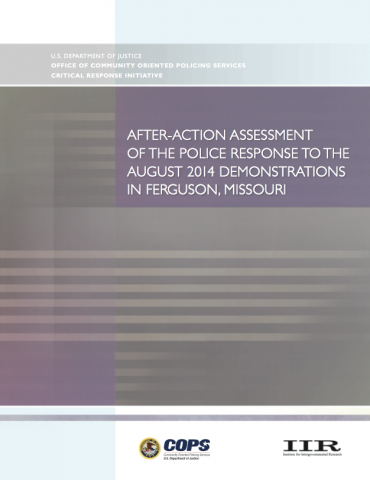 On August 9, 2014, Officer Darren Wilson of the Ferguson (Missouri) Police Department shot and killed Michael Brown. This tragic incident and the ensuing weeks of demonstrations and riots launched a national debate about racial profiling, use of force, militarization, and policing in general.

The After-Action Assessment of the Police Response to the August 2014 Demonstrations in Ferguson, Missouri examines the law enforcement response to the mass demonstrations during the first 17 days, focusing on the primary responders, the St. Louis County Police Department, the St. Louis Metropolitan Police Department, the Missouri State Highway Patrol, and the Ferguson Police Department. In this report, the after-action assessment team composed of subject matter experts identifies findings and provides lessons learned based on interviews, media content analysis, and literature reviews. This report also delves into specific topic areas from use of force to communications to policies and procedures.

Get the After-Action Assessment of the Police Response to the August 2014 Demonstrations in Ferguon, Missouri.