From the Introduction to the interim report: 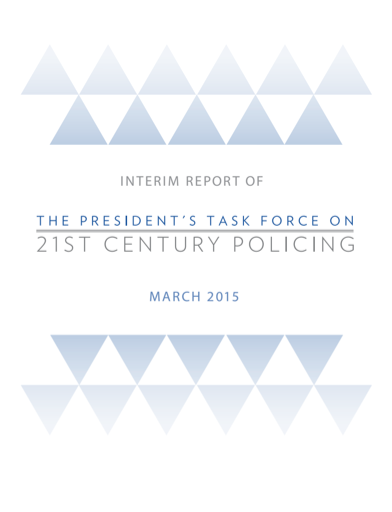 Trust between law enforcement agencies and the people they protect and serve is essential in a democracy. It is key to the stability of our communities, the integrity of our criminal justice system, and the safe and effective delivery of policing services.

In light of the recent events that have exposed rifts in the relationships between local police and the communities they protect and serve, on December 18, 2014, President Barack Obama signed an Executive Order establishing the Task Force on 21st Century Policing.

In establishing the task force, the President spoke of the distrust that exists between too many police departments and too many communities—the sense that in a country where our basic principle is equality under the law, too many individuals, particularly young people of color, do not feel as if they are being treated fairly. “When any part of the American family does not feel like it is being treated fairly, that’s a problem for all of us,” said the President. “It’s not just a problem for some. It’s not just a problem for a particular community or a particular demographic. It means that we are not as strong as a country as we can be. And when applied to the criminal justice system, it means we’re not as effective in fighting crime as we could be.”

These remarks underpin the philosophical foundation for the Task Force on 21st Century Policing: to build trust between citizens and their peace officers so that all components of a community are treating one another fairly and justly and are invested in maintaining public safety in an atmosphere of mutual respect.