As Marshalltown's Not In Our Town effort enters its second year, support from local law enforcement continues to grow.

Marshall County Sheriff Ted Kamatchus spoke about NIOT at the annual National Sheriff's Association Conference last month. Although lightly attended, he said those who heard what he had to say seemed intrigued by the effort.

A few of those in attendance told him they believed the program could help address some problems in their communities, he said. 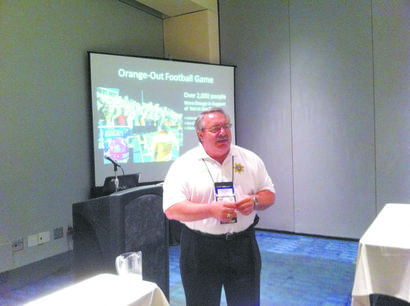 "Several of the sheriffs we spoke with were from communities in the south that are still dealing with some racial issues," Kamatchus said.

He said he told them they could stay ahead of the curve by starting a NIOT program like Marshalltown did before something horrible happens. The NIOT program changes the ethnic dynamic of a community.

Patrice O'Neill, executive producer and CEO of the Working Group, which spearheads the NIOT effort and asked Kamatchus to speak, said Kamatchus spoke with passion. He was earnest about his initial skepticism, which she said seemed to resonate with those who attended because of its honesty.

She said his talk was successful because he stayed focused on how the program addresses issues law enforcement officials face and how the NIOT program isn't just another program; it works.

"He has looked at it over time and has seen what people in the community have done," O'Neill said.

Both Kamatchus and Marshalltown Police Chief Mike Tupper are part of a cadre of advisors for a consortium that brings together the Working Group, law enforcement officials from the Federal Bureau of Investigation Homeland Security and the U.S. Dept. of Justice.

As the local NIOT committee amps up efforts, splintering into four focus areas-home, school, work and community-the MPD is also doing its part.

NIOT recently gave $500 to help fund the MPD's Student Academy, which has an anti-bullying element. The Student Academy puts 20 Miller Middle School students through a program designed to curb, among other things, bullying.

Kraig Lageschulte, said police worked with counselors and juvenile court officers to select at-risk students, but also thought it would be important to include students from other backgrounds.

"A lot of times students get a reputation early on," Lageschulte said. "If we are able to break down those reps, and a good way to do that is to get them to interact (with different types of kids) it builds camaraderie."If kids know one another, Lageschulte said, they are less likely to bully others. He said he hopes the program gives kids at an impressionable age positive role models and teaches traits that curb bullying.

Getting kids to think about what they will do in a bullying situation before it happens goes a long way to ensuring they make good choices, he said.

"Many of the good character traits we are talking about have to do with compassion, justice, fairness and equality," Lageschulte said.

The Student Academy starts Monday and runs through July 28.

Republished with permission from the Marshalltown Times-Republican.