Investigation of the Ferguson Police Department

This report, first published May 4, 2015, reveals the findings of the civil rights investigation of the Ferguson Police Department conducted by the Justice Department following the shooting of Michael Brown in Ferguson, Missouri.

From the report: Investigation of the Ferguson Police Department 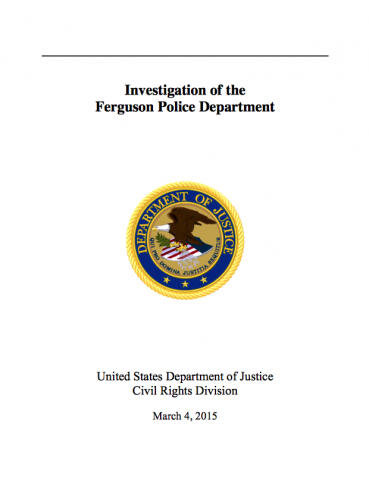 ​Over the course of the investigation, we interviewed City officials, including City Manager John Shaw, Mayor James Knowles, Chief of Police Thomas Jackson, Municipal Judge Ronald Brockmeyer, the Municipal Court Clerk, Ferguson’s Finance Director, half of FPD’s sworn officers, and others. We spent, collectively, approximately 100 person-days onsite in Ferguson. We participated in ride-alongs with on-duty officers, reviewed over 35,000 pages of police records as well as thousands of emails and other electronic materials provided by the police department. Enlisting the assistance of statistical experts, we analyzed FPD’s data on stops, searches, citations, and arrests, as well as data collected by the municipal court. We observed four separate sessions of Ferguson Municipal Court, interviewing dozens of people charged with local offenses, and we reviewed third-party studies regarding municipal court practices in Ferguson and St. Louis County more broadly. As in all of our investigations, we sought to engage the local community, conducting hundreds of in-person and telephone interviews of individuals who reside in Ferguson or who have had interactions with the police department. We contacted ten neighborhood associations and met with each group that responded to us, as well as several other community groups and advocacy organizations. Throughout the investigation, we relied on two police chiefs who accompanied us to Ferguson and who themselves interviewed City and police officials, spoke with community members, and reviewed FPD policies and incident reports.

Click here to download the Investigation of the Ferguson Police Department from the United States Department of Justice Civil Rights Division.