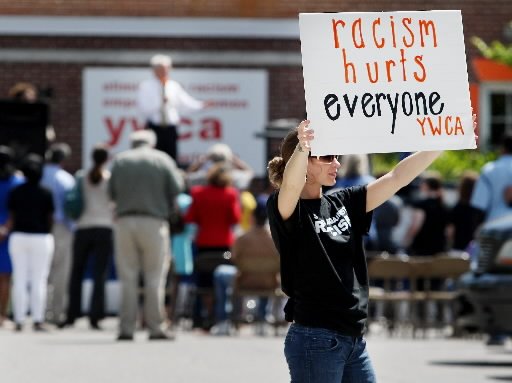 Hundreds of people gathered hands, cities across the nation held poetry slams, and thousands of people wore buttons against discrimination as part of the YWCA’s Stand Against Racism.

Nearly a quarter of a million people from 32 states and over 2000 organizations participated, and the governors of North Carolina, West Virginia, Kansas, New Hampshire and Massachussetts issued proclamations declaring April 30 "YWCA Stand Against Racism Day" in their respective states. 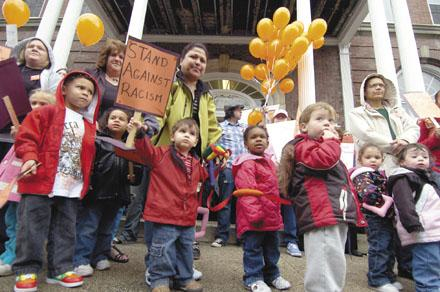 Troy, New York
Stand Against Racism is a YWCA program that aims to bring people together from all walks of life to raise awareness that racism still exists.  This year's theme was “racism hurts everyone."
The 2000 U.S. Census showed that Michigan was one of the top 10 most segregated states in the nation. A mere ten years later, WZZM in Grand Rapids reported on the impact the YWCA campaign already has had. (See video below.)
The YWCA, whose mission includes taking a stand against racism, invited local organizations to partner with them to maximize outreach efforts.
One such partner, Not In Our Town affiliate OneKanawha-Charleston, has had a longstanding partnership with the Charleston YWCA. On April 30, OneKanawha joined the larger Charleston community for a variety of events, including a screening of the original Not In Our Town Billings story, poetry slams, handing out bookmarks against discrimination and announcing the winners of the Y’s second annual all-ages Eliminate Racism Art Contest. This year's 174 entries can be viewed on the Charleston YWCA’s Facebook page.

In New Jersey, Not In Our Town Princeton members and local merchants stretched out their hands to Stand Against Racism, held a rally handing out pins that said, “Princeton: Let Friendship and Pride in Diversity Prevail," and organized a “thinking bowl” for people to reflect on their own experiences.

In addition to live events, the The YWCA of Asheville, North Carolina decided to take things online and posted a public stand on YouTube.
Quinsigamond Community College in Worcester, MA held a panel discussion led by the college president and members of the college’s Diversity Caucus. Quinsigamond was one of thousands of places where people signed public pledges against racism.
We salute the great work of the YWCA. To see more images and read more about Stand Against Racism, check out the YWCA website.