The Warriors Highlight Not On Our Ground at Historic Game 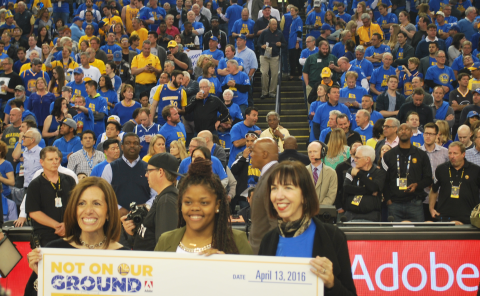 Spotlight on Not On Our Ground at Warriors Record Breaking Game

Oakland’s Oracle Arena was packed to the brim, ready for the Warriors chance to win more games in a season than any other team in NBA history. We are so proud to partner with the amazing Warriors and Adobe on our campaign to stop hate, bullying and violence. My mouth was agape when I saw that every single seat in the stadium held a t-shirt for fans that read Not On Our Ground.

Kevin Ding from the Bleacher Report on the NBA writes:

"..."Not On Our Ground," the T-shirts read. It wasn't referencing some potential Memphis upset. The purpose was to promote the Oakland-based nonprofit, Not In Our Town, with which the Warriors have chosen to partner. Not In Our Town is crusading against violence and bullying, and the Warriors want their fans to take a pledge against those things, too."

We were invited to appear on court just before the game and we were joined by Adobe and Shaun Livingston to honor Kristian Turner, a Skyline High spoken word artist who won the Not On Our Ground Picture the Pledge contest. Our NIOT Team helped fans take the Pledge to Stop Bullying and Hate in the hall outside the game. The Warriors video about Not On Our Ground played on the Jumbotron during half time.

This last game of the season with the Memphis Grizzlies was a thrill ride. Cheering, fist pumping fans screamed with jubilation with every score, but most especially Steph Curry’s three pointers, as he set a new record with 402 3- point scores for the season. He’s not the only star—each one of the Warriors shine, and play like champions because they perform as a team. They show us what can happen when we work together for our community.

Not In Our Town is honored and grateful for the recognition of our work from these powerful partners. We will always remember this game or the moment that showed strength in numbers and the potential to spread this message about how to stop hate bullying and violence. 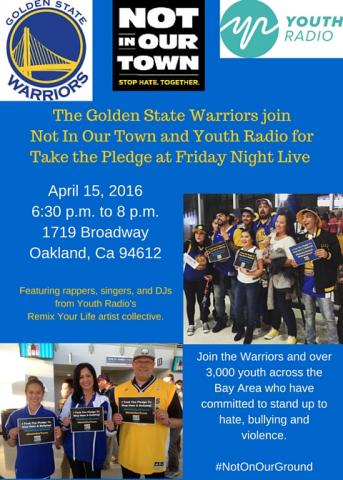 NIOT is teaming up with Youth Radio for their "Friday Night Live" event. Local poets will be performing, accompanied by Youth Radio'sresident DJ Rhymes for Inclusion. This event is part of the Not On Our Ground campaign to stand up to hate, bullying and violence. Join us on Friday to sign the pledge.

The Golden State Warriors and Shaun Livingston joined 300 students from Philip and Sala Burton High School, Skyline High School, Fremont High School, McClymonds High School, and Galileo Academy of Science and Technology at the Scottish Rite Center in Oakland for Not On Our Ground event to take a stand against bullying, hate, and violence. Students gathered to take the pledge and participate in a "Picture the Pledge" contest to interpret the pledge through videos, spoken word poetry and skits.

Executive Producer Patrice O'Neill will be recognized during halftime for her leadership on the Not On Our Ground/Not In Our Town campaign and she will introduce the contest winner at the game. Join us there and sign the pledge and take a stand against bullying, hate and violence.

Facing History Features Not On Our Ground

Not In Our School director Dr. Becki Cohn-Vargas recently wrote a blog for Facing History and Ourselves about the Not On Our Ground pledge campaign and our collaboration with the Golden State Warriors and Adobe. The following is an excerpt from the article:

"When sports teams work together with members of their community to end hate and bullying, they can make their schools and neighborhoods safe and welcoming for all. These efforts can be amplified and spread across the country, bringing thousands of young people together in a shared commitment to creating a more inclusive country." --Dr. Becki Cohn-Vargas

In:
warriors
Golden State Warriors
Youth Radio
Not On Our Ground
facing history and ourselves