Almost every day, a new hate incident is in the news. Mosques and synagogues are being vandalized, people of color, immigrants and LGBT people are threatened and attacked on a daily basis. For over 20 years, as a leader of Not In Our Town, I’ve reported on community response to hate violence across the country. Hate is not new, but we've never seen the level of hate activity that has been reported in the past few months. In this volatile time, there are also remarkable signs of hope and solidarity, and that’s the story NIOT seeks to highlight every day.

Less than one week after the desecration of nearly 200 graves at a Jewish Cemetery reported below, another Jewish community in Philadelphia has been attacked; once again Muslims showed up to stand with their Jewish neighbors.

After the attack in St. Louis, Muslim activist Tarek El-Messidi organized a fundraiser to help repair the destruction of the graves at the Jewish cemetery. CNN reported, that "as of Tuesday morning, the campaign had raised $138,000 -- nearly seven times the original goal of $20,000," so these funds are also able to support the clean up efforts in Philadelphia.

"I want to ask all Muslims to reach out to your Jewish brothers and sisters and stand together against this bigotry," El-Messidi wrote on Facebook. 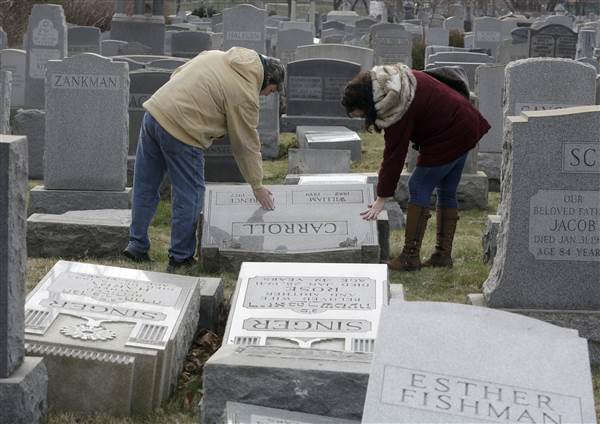 This week, attacks on the Jewish community were felt across the country. It started near St. Louis, my hometown. Nearly 200 graves were desecrated at Chesed Shel Emeth, the Jewish cemetery in University City, MO. A beloved friend and teacher of mine is buried here. If you look at the pictures, this wasn’t a “prank, ” as vandalism like this is sometimes called if it is committed by young people.  Someone wanted to send a message.

Then friends started posting about bomb threats at Jewish Community Centers in Milwaukee and Minnesota. JCC’s in nine states were evacuated on President's Day. Moms and dads who leave their children at Jewish centers for day care spoke about how it feels for their children to be vulnerable.

This is the fourth wave of bomb threats in the past two months targeting 54 Jewish centers across the country. Law enforcement reported that most of these threats turned out not to be credible, but “terror” works to create fear and immobilize.

These anti-Semitic incidents may have been designed as psychological terror trying to frighten the Jewish community and pull people inward. But fear is not going to keep Jewish people from standing up for each other or for their neighbors who are under attack.

Solidarity and Swift Action is Key to Fighting Hate: Muslims Stand with Jews

In an act of solidarity, Muslim leaders were there to stand with the Jews of St. Louis in the face of hate. Muslims immediately responded when the St. Louis Jewish Cemetery was attacked, and quickly raised the funds needed to repair it.

Muslim leader Linda Sarsour, Executive Director of the Arab American Association of New York and one of the organizers of the Women's March on Washington heard about the anti-Semitic attack and took swift action. Linda was a victim of a hate crime herself in 2014 when a man in New York chased her and threatened to cut off her head.

Practicing solidarity and standing up for each other makes our communities more resilient and able to respond quickly and effectively to hate incidents. Jimmie Yee, an Asian American Vice Mayor in Sacramento, CA remembered when he was a victim of a hate crime, and swiftly gathered Asian American leaders to organize support for Jewish neighbors when they faced an attack. Watch this video about their story.

The only way to defeat hate is to overwhelmingly reject it at every occurrence.

Share the Story: Alert your community if you are targeted or if you hear about an attack or a threat. Find or create a positive action supporting those who are targeted.

Spread Solidarity: Make a powerful force against hate. As those who are targeted lead the way, diverse groups of people stand up together to show that an attack on one is an attack on all.

Show up for Support: Physically show up to be with people who have been targeted. Organize rallies, vigils, teach ins, community town halls, film screenings, dinners. Send cards, letters, artwork. But don’t stop there. We walk together, get to know each other and get through the hard work of dealing with racism, bigotry, and the everyday ignorance and intolerance that keeps us separated. As we do this we are practicing and building an unstoppable force against hate.