In March a student group calling itself the White Student Union announced plans to conduct patrols of Towson University campus in Maryland to address "black predators." This led members of the black student body, university administration, and others who denounce the controversial student organization's views to take action. In this article for The Burton Wire, Towson University Assistant Professor Tara Bynum accounts how students responded to intolerance and why it's important to learn from history and tell our stories. 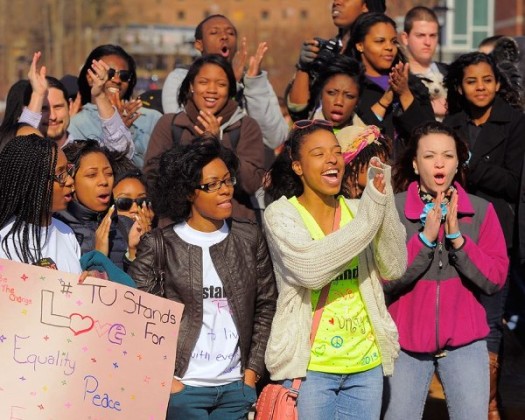 Towson University students march in response to the call for patrols on campus by members of a non-affiliated white power organization, via Burton Wire.

By Tara Bynum
I teach African American literature at Towson University. Every semester, I try to make relevant the varied stories—fiction and nonfiction—of our recent and distant American past. I try to make real the everyday realities of racism, and sexism as we read the books from the “olden days” or the unspecified past that begins, most often, before right now.
For the last year I haven’t had to try too hard to make the past real. It has found its way onto campus through the lens of two student-run (albeit not affiliated with the university) groups, Youth for Western Civilization (YWC) and the White Student Union (WSU). Both groups were created to celebrate the historical and moral value of whiteness. YWC lost traction last year after smearing the campus with racial slurs and losing its faculty advisor, but its leaders rebranded and gave it a new name, “The White Student Union.” The WSU has made national headlines with its brand of ideology that recalls the rhetorical turns of yesteryear’s white supremacist organizations, such as the Klan or the White Citizens’ Council. What was once “back then” has made it into classroom discussions as part of right now.
My students have  responded with horror and annoyance and have taken action. They want to speak about the complicated ways that racism has made its way on to their campus and into their classrooms. They want to speak against the silences that have rendered racism a figment of an American past. Last year after YWC chalked the campus with racial slurs, students in my first-year seminar asked to make a public service announcement against racism and for learning history. Their message—“Stop violence. Learn History”—was simple because we can’t stop what we refuse to see, name, or remember. They wanted to be sure that their peers could see, name, and remember this very present reality. Click here to read the entire story at The Burton Wire.
Tara Bynum, Ph.D. is an Assistant Professor in the Department of English at Towson University.
In:
racism
black americans
Towson Maryland
white student union