Teachers Share Stories, Lessons from White-Out to Erase Bullying Event | Not in Our Town
Skip to main content

“White-Out was that handy product used to wipe out mistakes, eliminate errors, and allow users of typewriters to begin anew.

White-Out against Bullying is a movement, effort, and initiative to wipe out practices that demean, embarrass, belittle, or hurt others.”
—Eleanor Matthews, The Echoes-Sentinel
Our new Not In Our School film, “White-Out to Erase Bullying,” is a great model to create a community-wide anti-bullying campaign. NIOS Director Becki Cohn-Vargas spoke with White-Out advisors Mary Sok and Jamie Lott-Jones about the event and lessons that can be used for other schools.
WHRHS social studies teachers Jamie Lott-Jones
and Mary Sok (l-r). Photo Credit
These Watchung Hills Regional High School teachers work hard to bring issues of social justice forward to their students through Facing History curriculum and Not In Our School. Their classrooms were first featured in the popular NIOS film, “Students Stand Up to Cyberbullying,” and were featured in the Common Sense Media Digital Citizenship Conference in New York City.
Jamie and Mary have been honored for their NIOS efforts twice by the Anti-Defamation League. Jamie currently serves as president and Mary as vice president of the New Jersey Diversity Council, a state-wide group of educators dedicated to promoting intercultural understanding and ending intolerance. They hope to help their students who have set a goal of making the NIOS White-Out a statewide initiative.
About the School and Community
Watchung Hills Regional High School is a school of 2,200 students from four different New Jersey towns: Watchung, Green Brook, Warren, and Long Hill. All are suburbs of New York City. This is the first time all schools in the region have joined together for an activity or action.
Laying the Groundwork for Anti-Bullying Work
From a classroom activity, Watchung’s Not In Our School cyberbullying film was shown to the entire school and became part of a school-wide effort. In Spring 2013, they decided to make a community-wide campaign. Their overall purpose is to instill in their students the commitment to promote tolerance and minimize hate in their school community and to help the students build confidence and become good public speakers in the process.
One Community Inspires Another: Planning the White-Out
The White-Out idea was inspired by another NIOT campaign in Marshalltown, Iowa where students held an Orange Out. In Watchung, they decided to call their campaign a “white-out” to erase the hate and bullying.
After garnering support from their school superintendent, they approached two student leaders to develop a logo and formed a student leadership group that partnered with an existing school Diversity Committee. Then students began a massive outreach effort to the four local towns, civic leaders, school superintendents and community groups who feed into Watchung Regional High School.
Students developed campaign materials and distributed posters, stickers and a how-to guide to the 13 local elementary and middle schools that feed into their high school. Students also offered mini-workshops to help students at those schools plan activities. The Watchung High Pathways Career Class made posters and a huge banner for the pledge. Student leaders also contacted the press and politicians.
Garnering Outside Support
As excitement grew, librarians spread the word and put up posters. Major corporations in the area encouraged their employees to wear white. All week, awareness-building activities were held on the high school campus, including programs on bullying and acceptance. The night before the White-Out, the high school hosted a staff and student volleyball game. On the day of the White-Out, everyone was thrilled that it snowed. “Even the weather joined in the action,” they said.
Each of the thirteen schools held an anti-bullying assembly and the high school leaders led activities at their school and also at one middle school and one elementary school. New Jersey State Senator Thomas Kean Jr. and Somerset County Sheriff Frank Provenzano came to the school to demonstrate support. Many other politicians also participated, including, Assemblyman Jon Bramnick, Assemblyman Jerry Green, Assemblywoman Nancy Muñoz and Watchung Mayor Jerry Mobus. All four local towns passed proclamations and employees wore white on that day. The day ended with the Mayor Mobus signing a proclamation at the Watchung City Council.
Lott-Jones and Sok were most proud that the students embraced their role and took the activities seriously and went above and beyond to make it happen.
Addressing Challenges
The greatest challenge was finding the time to address these issues while teaching a rich World Cultures Curriculum. In addition, some high school students equate “bullying” with elementary and middle school behaviors.
Impacting Students and School Climate
The White-Out really gave the students the confidence they can make a difference and be the “power of one.”  The event united students from all four towns, connecting kindergarteners to high school seniors and gave students the ideas and strategies to move from bystanders to upstanders.
Members of the community had the opportunity to participate and serve as role models for the students across the district. Students in the schools were able to identify peers and adults who they see as “allies.” Adults and students in four towns united to embrace the idea of acceptance.
What Now? 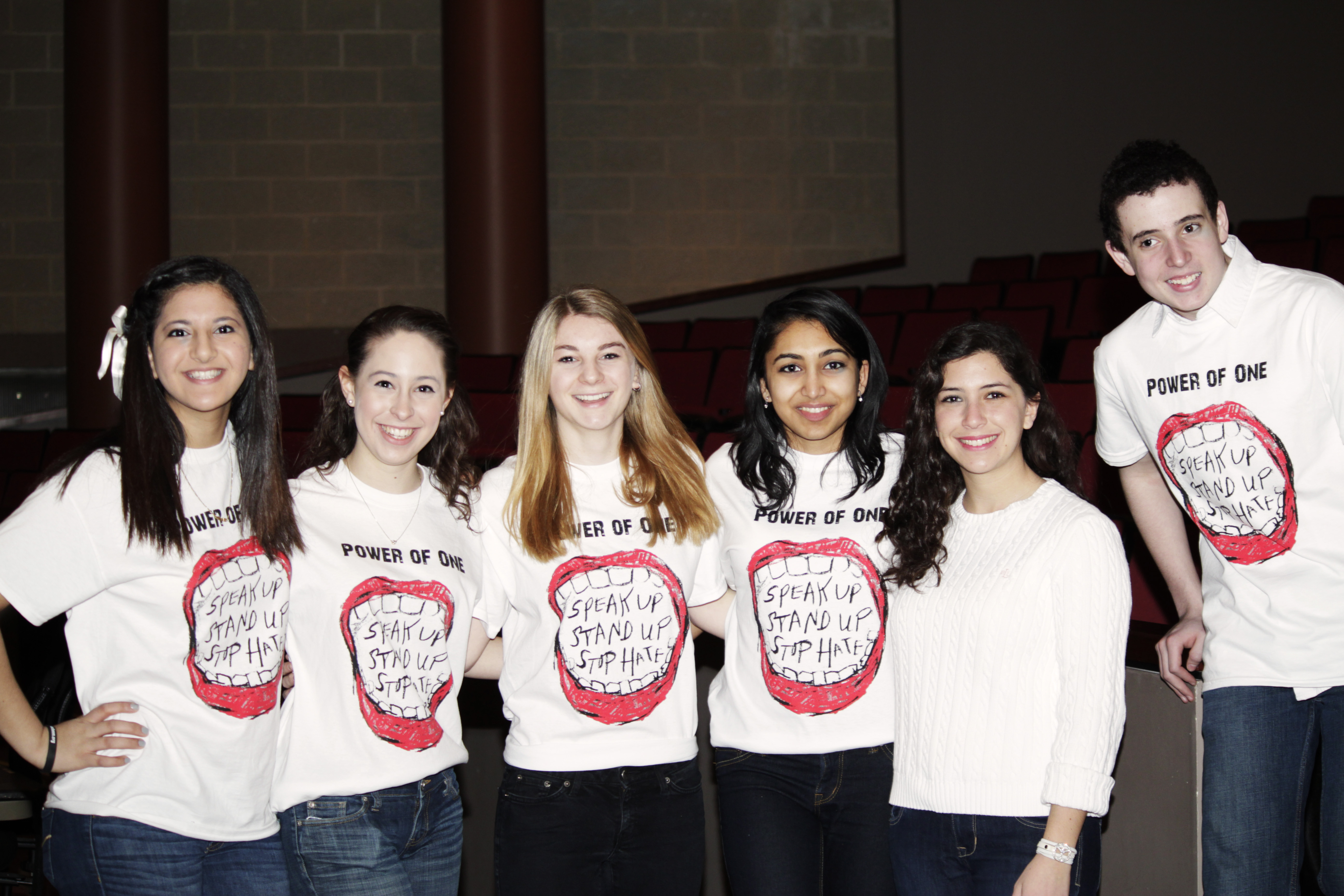 Plans have already begun for this year’s White-Out. Students are already asking to join the committee and have an amazing goal for the coming year: They plan to spread the White-Out across all New Jersey schools.
They are hoping to meet with Assemblyman Bramnick who wrote the New Jersey anti-bullying bill. They would like to meet with him and get him to support the plan to make March 7, 2014, a statewide New Jersey White-Out to stop bullying.
Advice for Other Educators
Make the event a student-centered activity and have a core group of dedicated students who can get the job done. Plan the event well in advance and expect bumps in the road. Find an administrative ally and coordinate with members of the community. Many people will be excited to be part of a large community event.
Make your school and community safer with a community-wide anti-bullying campaign. Plan a White-Out to Erase Bullying event at your school with this lesson plan and activity guide and the Not In Our School Anti-Bullying Quick Start Guide.
In:
anti-bullying
new jersey
watchung hills regional high school
anti-bullying campaign
watchung
white-out
student upstanders