A Tale of Two Cities: Marshalltown, Iowa and Patchogue, NY (Times-Republican) | Not in Our Town
Skip to main content

That's why we talk. That's why we have dialogue: to learn about the things that we are unaware, they said. We all come from different backgrounds, and it takes a collective effort to weave a tapestry that paints an accurate portrait of our community.

By David Alexander, Staff Writer at the Times-Republican

Sister Chris Feagan said people are like M&Ms: they come in a variety of colors, but they are all the same inside. 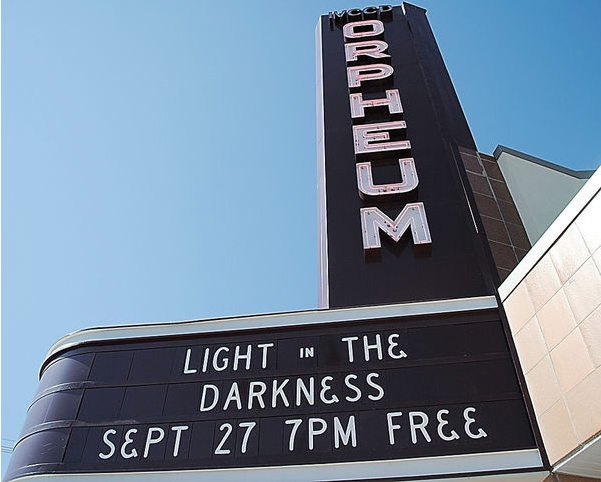 PHOTO BY DAVID ALEXANDER
The documentary centers on the town of Patchogue, N.Y., which, in 2008, saw several racial hate crimes that eventually culminated in the murder of Ecuadorian immigrant Marcelo Lucero.
"A story from one community can help another community open up a conversation about the issues they face in their town," said Patrice O'Neill, executive producer of the film.
The panel will include Feagan, who works with St. Mary's Hispanic Ministry, Marshalltown Police Chief Mike Tupper, Joa LaVille, chair of the steering committee for Immigrant Allies and Joan Jaimes, Marshalltown Community College outreach counselor.
Coordinators want the discussion to be more of an anecdotal conversation involving community members than a traditional panel discussion. Panel members will simply guide and prompt the talk.
Pip Gordon, director of the Orpheum, said the conversation would help localize the film as well as help viewers process its content.
"We know that civil discourse is absent in many of our public arenas we have some pretty engaging stories from the community It puts a local face on it," she said. "It's easy to say 'that's not our town.' A lot of folks don't know what's going on."
One of the more interesting things about the movie, LaVille said, is how the Lucero family moves on from wanting revenge to striving to heal. It's a message that applies to communities of any size.
O'Neill said the undercurrent of the film is the danger of the division that lies beneath a community's surface.
"Many good people were silent before this crime happened," she said of Lucero's death. "That is true of any community. What is remarkable about Marshalltown is that people are standing up there before something happens."
Both O'Neill and LaVille echoed each other in saying it's important to focus on learning about the dark corners of Marshalltown's community. That way, we can aim to remedy them instead of brooding about the ugliness of the town's underbelly. Only shining a proverbial light on those areas can change them.
That's why we talk. That's why we have dialogue: to learn about the things that we are unaware, they said. We all come from different backgrounds, and it takes a collective effort to weave a tapestry that paints an accurate portrait of our community.
"Nobody should feel bad that they don't know," LaVille said.
Tupper said the police department needs to be involved with the Not In Our Town effort so incidents of domestic abuse don't have tragic results. The MPD needs to have a good working relationship with citizens to ensure it has its finger on the pulse of the community.
Not all instances of domestic abuse are reported, he said. That needs to change.
Stamping out even the smallest iota of bullying is essential, Feagan said. Tragedies happen every day, but they don't always make headlines because no one dies. But just because no one holds a funeral, doesn't mean bullying isn't killing its victims.
"It takes a little of their life away," she said. "It makes them feel like less of a person."
"A tale of two cities" is republished from the Times-Republican, one of the sponsors of Marshalltown, Iowa's Not In Our Town campaign.
In:
Not In Our Town
light in the darkness
marshalltown
iowa
preventative strategies