Standing Up, Not Standing By, in Brattleboro | Not in Our Town
Skip to main content

Standing Up, Not Standing By, in Brattleboro 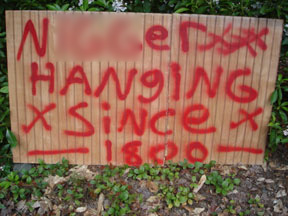 It was the worst kind of nightmare for the mother of a bi-racial high school student.  In June, the people of Brattleboro, Vermont learned that a racist youth group called NHRA (“N—– Hating Redneck Association”)  was active in the local high school. Larry Pratt Jr., a 17-year-old NHRA member, was arrested after waving a weapon at a multi-racial group of students near the high school grounds. Pratt and several other NHRA members were suspended from school and placed in a restorative justice program, but the alarm bells were ringing for parent and musician Barbara Holliday.

“It was the most visible in a long line of incidents, and the potential of violence was evident. Flyers from David Duke’s organization started appearing in surrounding neighborhoods. Nooses had been graffitied on road signs. The young people [in the NHRA] had nearly 30 members on their Facebook account and some had tattoos on their knuckles, formalizing their relationship to this racist group.”

Barbara believed that the incident and the organizing efforts of white supremacists in the community required a larger response. She contacted Not In Our Town for advice about how to start a NIOT response. She began circulating the NIOT films to the local library, Boys and Girls Clubs, and arranged regular broadcasts of the Not In Our Town Billings story on the local cable channel.

“These issues fester. And if children see their parents ignoring these incidents, it gives them sanction,” she said.

In the middle of these challenges, Margaret MacDonald, a leader of the Not In Our Town Movement in Billings, Montana, sent a message to people in Brattleboro. “If the town [...] says that what happens to the smallest minority, happens to us all; and we will not stand by and permit that to continue, the whole community is strengthened and relationships are built up.” Margaret wrote. (Read Margaret MacDonald’s full letter in the post below.) Lise Sparrow, pastor of the Guilford Community Church UCC and co-chairwoman of the Brattleboro Area Clergy Association, has been circulating Margaret’s message to local faith leaders.

“There’s a sense of isolation until you realize these incidents are part of a bigger picture. Margaret MacDonald’s comment really hit home for people.” Barbara said.

Barbara still believes there is much work to do. “Everybody wants it to go away, but we have to acknowledge it, we have to stay active.”