Screenings at Harvard and Lexington, MA Spark Urgent Discussion and Action | Not in Our Town
Skip to main content

Leaders and community members from the Boston area came together to screen "Waking in Oak Creek" and to disucss how to prevent hate and intolerance. (Image source: The Harvard Gazette).

By Patrice O’Neill, Filmmaker and Not In Our Town Leader

I told the audience I was wearing red that night to express a sense of urgency about the need for all of us to stand up to hate at this volatile moment in our country. The Depot in Downtown Lexington MA was standing room only, as town leaders and residents from the area, representatives from five law enforcement agencies, members of diverse faiths--including a large contingent of Muslims and Sikhs--school board members, superintendents, teachers, and elected officials gathered to learn about Not In Our Town and see the film Waking in Oak Creek. The office of U.S. Attorney Carmen Ortiz cosponsored the event with the BRIDGES program, and they had sent out invitations to key leaders a few weeks earlier. People responded, and the audience clearly understood what is at stake.

The event was one of two screenings of Waking in Oak Creek in the Boston area on January 26th and 27th: one at the Brattle Theater in Cambridge by the Harvard Pluralism Project, and the other at the Lexington Historical Society.

Dr. Diana Eck led a panel and audience discussion after the screening in Harvard Square. This article in the Harvard Gazette provides highlights of the conversation.

Pardeep Kaleka and Arno Michaelis, who appear in the film, shared inspiring messages of reconciliation during the panel and audience discussion following the film. Pardeep explained why his family and other Sikh leaders sought engagement with the community rather than revenge or anger after his father, along with six others, was killed in a hate crime at the Sikh Temple of Wisconsin in 2012. Arno Michaelis, a former violent white supremacist who now works with Pardeep on a successful youth violence prevention program called Serve2Unite, shared his thoughts about how receiving kindness from people he had hated eventually turned his life around.

Navjeet Singh, New England Director of SALDEF (Sikh American Legal Defense and Education Fund) expressed alarm at the hate-fueled rhetoric in the political debates.  He told me that after my opening comments, he went outside and changed his turban from white to a red one.

The audience in Lexington was engaged and ready for action, and a few participants shared disturbing experiences. One man told a story about his daughter, who was on the train in Cambridge, MA wearing a hijab, when another passenger started yelling that "she had a bomb.” It was only after the young woman opened her backpack and coat and presented her Harvard ID that the hysteria was calmed, her father reported.

By the end of the screenings, sign up sheets for screening follow-ups were filled, and several leaders committed to sharing the film with their faith groups, cities and constituents.

U.S. Attorney Carmen Ortiz, who has a long-term commitment to civil rights issues, closed the program by urging the audience to use this opportunity to do more to address the intolerance in our communities.

Many thanks to the conveners and organizers: Dr. Diana Eck, Whittney Barth, and Elinor Pierce from the Harvard Pluralism Project, whose mission is to help Americans engage with the realities of religious diversity.

Aloke Chakravarty and Cara Henderson from the U.S. Attorney’s Office, as well as representatives from the BRIDGES Program, pulled together leaders from around the region to introduce Not In Our Town and Waking in Oak Creek to their community.  We can’t wait to see what happens next! 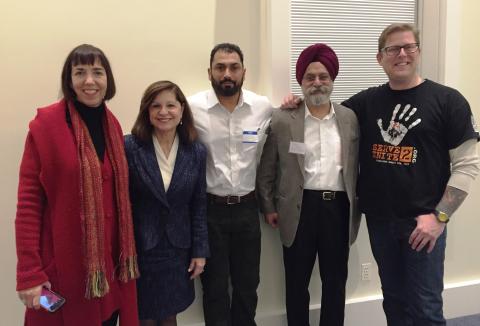