So how can we stand with Native Americans in our communities?

It starts with asking, listening, and learning about Native issues and concerns.

One of the most blatant areas of racism and stereotyping faced by Native Americans can be found in sports. The Washington R*dskins of the NFL, and the Cleveland Indians mascot are just two examples. Across the country there are a number of high schools, middle schools, colleges, and more that continue to use stereotypes of Native Americans as their school and sports mascots. This models to our youth that using these images is acceptable. By continuing such practices with our children, the cycle of ignorance is ensured.

In Marin County, California, The White Buffalo Woman Council, a group of Native American leaders, has been working to raise awareness about the harmful effects of stereotypes in schools and community life. They have concerns about the use of Native American mascots in schools and Little Leagues, the misrepresentation of Native history and culture in school curricula, and the way in which Non-Native people causally appropriate Native culture for personal and financial gains.

When one of the Council members shared in a Marin NIOT meeting her regular experience of being confronted with Native American caricatures and stereotypes in her community, the local NIOT members rallied to be a voice of support for her concerns.

The next day NIOT members began making calls to the local orthodontist’s office who was giving out coins with a stereotypical Native American image on them to their young clients to collect for prizes. The NIOT members respectfully requested that the orthodontist office stop passing out the coins and replace them with something more appropriate. After the calls, the Orthodontist replaced the demeaning coin with something neutral and inclusive.

If any of us wish to be respected, if we wish to celebrate and honor the differences that make us unique - whether it’s heritage, culture, race, sexual preference - we must step out of our comfort zones and stand with each other to shatter stereotypes and the harm they cause. These resources can serve as a useful starting point for those of us who wish to know and do more. Let’s stand with Native Nations and the Native American community..

NoMoreNativeMascots.org is a group of Indigenous advocates and non-Indigenous allies who seek to confront the colonization of our identities as Indigenous people. The group strives to dismantle racist institutions by targeting sports teams who use racist Native mascots/nicknames as well as those who use general Native themes.

More Than A Word analyzes the Washington football team and their use of the derogatory term R*dskins. Using interviews from both those in favor of changing the name and those against, More Than A Word presents a deeper analysis of the many issues surrounding the Washington team name. The documentary also examines the history of Native American cultural appropriation.

Breaking Stereotypes: Native Americans Fight On is a short documentary examining the effect of stereotypes on Native American students at a Los Angeles continuation high school.

The National Congress of American Indians launched a campaign to address stereotypes of Native people in popular culture and media, as well as in sports. 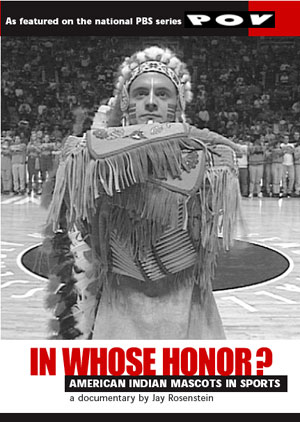 Charlene Teters, a professor at the Institute of American Indian Arts in Santa Fe, New Mexico, began her activist career with a vigorous dispute with the University of Illinois over their use of a stereotyped image of an American Indian for the school’s mascot. The documentary, “In Whose Honor?” showcases her powerful work to fight against the struggles of Native American groups.

Dr. Adrienne Keene is an Assistant Professor of American Studies and Ethnic Studies at Brown University. Along with extensive research she also examines representations of Native peoples in popular culture, Native cultural appropriation in fashion and design, and the ways that Indigenous peoples are using the internet, social media, and new media to challenge misrepresentations and create new and innovative spaces for art and activism. As a citizen of the Cherokee Nation, she is also dedicated to pushing back against stereotypes and misrepresentations of Native peoples on her blog, Native Appropriations.

Dr. Stephanie Fryberg is an Associate Professor at the University of Washington. Her research includes papers on the impact of self-relevant representations on school belonging for underrepresented Native Students, Cultural Diversity and Ethnic Minority Psychology, and “Frozen in time”: The impact of Native American media representations on identity and self-understanding. Journal of Social Issues.

Dr. Michael J. Yellow Bird is the Director of Indigenous Tribal Studies at North Dakota State University. His teaching, writing, research, and community work focus on Indigenous Peoples’ health, leadership, and cultural rights; the effects of colonization and methods of decolonization; decolonizing social work approaches; decolonizing war and military service; neurodecolonization and mind body approaches; neuroscience and Indigenous Peoples; traditional mindfulness and contemplative practices; ancestral and paleo eating and lifestyle; and the Rights of Mother Earth. His books include, Decolonizing Social Work, For Indigenous Minds Only: A Decolonization Handbook, and Indigenous Social work Around the World: Towards Culturally Relevant Education and Practice.