Profile: No Room for Racism in Shasta County, CA | Not in Our Town
Skip to main content

Profile: No Room for Racism in Shasta County, CA

Tom O’Mara is a longtime activist in his home county of Shasta, California. His community rallied together after a racially motivated shooting and formed the now-Shasta County Citizens Advocating Respect in 1988. In the early 1990s, Tom joined the group, which has been active through three major hate crimes including the murder of a gay couple by white supremacists, profiled in a Not In Our Town film. He now works closely with law enforcement, serving as a bridge between the community and the police.

What kind of work do you do in your community?
I am retired from a variety of social service, non-profit, and safe school grant administration jobs, and I am now a volunteer Civil Rights Advocate for the Redding Police Department. I am also an owner-builder of a solar house and do some speaking in that regard, and volunteer with the Shasta Land Trust.
When did you become involved in anti-hate work and why?
I have always had a heart for these kinds of issues because they are an affront to basic fairness and equality, and I got some good training at Glide Memorial Church in San Francisco in the late 70’s. But I got more formally involved in the early 90’s with what is now the Shasta County Citizens Advocating Respect (SCCAR), as I worked with then-SCCAR president Fran Brady.
We have had three major hate crimes in our community since that time: the killings of a gay couple, Gary Matson and Winfield Mowder, by two white supremacists (1999); a cross-burning at the home of an African-American family in Anderson in 2004; and the attempted bulldozing of a Sikh Temple, also in Anderson, in 2006. These incidents and others, plus the fact that we have no human rights commission here, made it essential for a group of people to stand up and say, “Not In Our Town.”
What work are you most proud of?
I am most proud of my role in the posting of 75 signs which bear the slogan, “No Room for Racism.” The Anderson signs add “Hate or Violence.”
This began in 1994, and the signs now bear the logo of the school or city/county where they are posted. It was a real political long shot, and it was not universally embraced at first. More than the signs themselves is the significance of a group of people willing to back them up.
What do you see as the challenges to anti-hate work in your town today?
Not having a human rights commission is big to me, as is the financial sustainability of SCCAR. There is a basic level of support that will allow it to continue as an organization, but can only do so much as a non-profit without having a city or county seal on its operations.
There is also the aging of SCCAR leadership, and not such an effective outreach to youth. Young people today see these issues differently, and just not sure how they will express their leadership as time moves on. 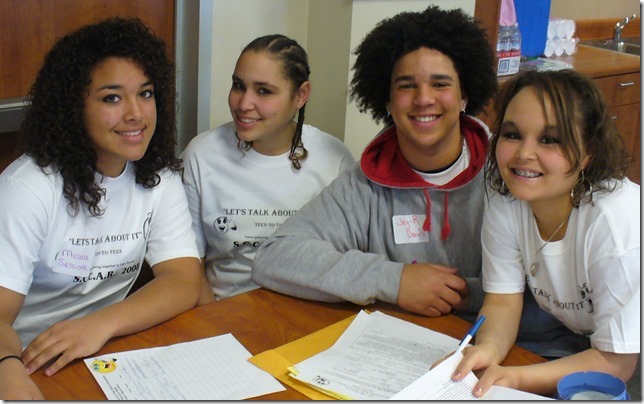 Participants at SCCAR youth leadership conference.
What gives you hope?
SCCAR does have a very good scholarship program for students at Shasta College, named for one of our civil rights heroes, Ms. Isaac Lowe. The new Civil Rights Advocate position with the Redding Police Department (and eventually all local law enforcement) provides a new level of communication with law enforcement for hate crimes/incidents, and additional support to victims.
What advice would you give to other community leaders who want to address hate and intolerance in their town?
It’s important to be credible and professional. I think law enforcement and hate prevention groups have a lot of common ground, so start the conversation if there isn’t one.
We got signatures of support on a petition for No Room for Racism from the sheriff, police chief, superintendent of schools, director of chamber of commerce, and many other community and elected leaders. We invite them annually to the SCCAR Civil Rights and Social Justice Awards Dinner.
We have found a lot of support in what is otherwise a very conservative and “the government that governs best governs least” community. We have challenged the community to live up to the values expressed in the Declaration of Independence (and later further developed). It’s in everyone’s interest that we include all peoples in participation of the leadership of our community.
Learn more about SCCAR at their Facebook page.
In:
profile
Not In Our Town Northern California
shasta county
sccar
tom o'mara