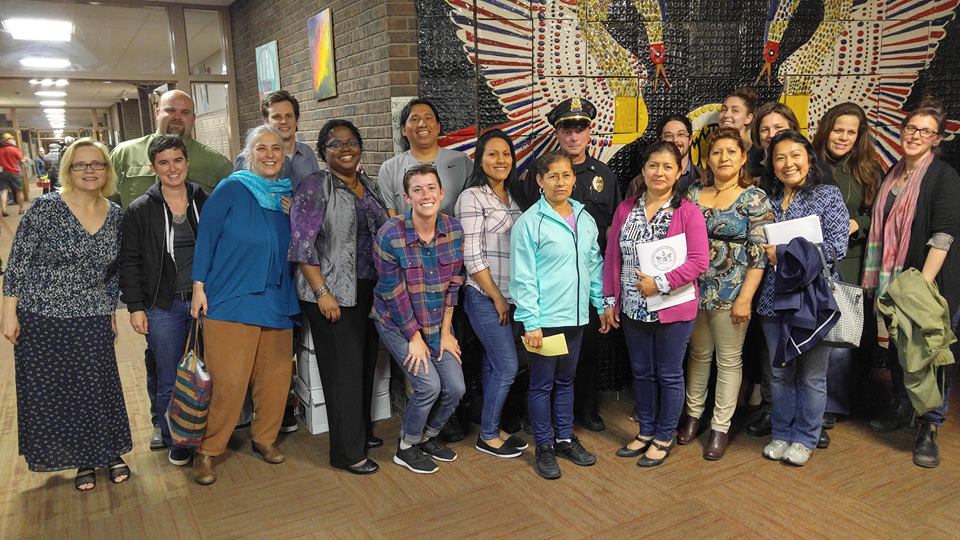 Gwendolyn VanSant with Multicultural BRIDGE and its constituents, community members and allies drafting and passing a local (rural-specific) safe community policy in her hometown May 2017.

“To know love we have to invest time and commitment... dreaming that love will save us, solve all our problems or provide a steady state of bliss or security only keeps us stuck in wishful fantasy, undermining the real power of love—which is to transform us.” –bell hooks

In order to transcend white supremacy, we must become centered in ourselves, our values, and our hard, shared work ahead. This requires cultural humility and transformative love in action.

White supremacy is the internalization of the idea of white superiority (the knowing better or being the one to help or “invite in”). Cultural humility is the ability to look at yourself and commit to consider a privilege and power analysis as it impacts your everyday assumptions and interactions. So often we fight against the bigotry of the “other” person instead of examining ourselves. We must unpack white supremacy and our own values that interact with that bias. This takes courage and risk. We must ask questions like:

Cultural humility means listening to stories of white supremacy as it has been experienced by people of color and believing them. I notice a consistent desire on the part of white allies to “fix” and “help”. Too many people of color work to exhaustion, hoping white allies will dig deeper and make real changes in their families, churches, and networks. We work willingly and just ask for the same level of investment, risk and listening. But too often we become the project versus all of us being able to focus and do the work that begs to be done together. Reverend Traci Blackmon states, “The story matters… The role of the ally is not to lead or to fix. The ally holds the story and amplifies the voice of the storyteller.”

I have been invited to “testify” to the existence of white supremacy in my own life many times. As you read my stories, reflect: “Where am I in this story? What can I do?”

At a recent speaking engagement, I was confronted by a woman who described George Washington, as one of our forefathers of our country, as being a better man than Robert E. Lee. Her reason was that Washington freed his slaves at his death despite daunting recorded stories of Washington and Martha hunting down escaped slaves for years. “He did the right thing for his time,” she said. She went on to say he could not free his wife’s slaves as “they weren’t his” and could not free the slaves entrusted to his children as “that was their livelihood.” In this moment, I saw the double-edged sword of even the most dedicated white liberal ally. What this country has sold along with racism is access to wealth, privilege, and security for the white family. Who is ready to give up that for the sake of the “other”? I knew my work that night was not to hold my tongue, so I named the contradiction in values I heard spoken. But in my heart I hoped my white allies in the room would have said something first. They did not. That action would challenge the safety white supremacy has promised them since the founding of this country.

In 2017, many Americans are waking up for the first time to how Confederate statues and monuments were originally meant to intimidate people of color. The problem with asking, “Should the statues be taken down?” is how myopic this question is. We can take down as many as we want, and we still have to do personal work around racial justice and systems change. Otherwise, statues will come down and a larger, more intimidating force will emerge without the work of coordinated racial justice interventions.

In communities across the state, we are talking about murals, plaques, and monuments to honor the great Civil Rights leader W.E.B. Du Bois for his 150th birthday anniversary. And some people have expressed fear for backlash and the trepidations over his patriotism as a Black Civil Rights activist and the charged political climate after Charlottesville, VA. We are actually tasked with tallying up how many white monuments we have and talking about where and how to place this global Civil Rights icon and his name so it doesn't create a community divide over his politics. This threat of discomfort around celebrating a historical leader who stood and wrote eloquently and sagely for economic justice, civil rights and progressive education challenges internalized and overt white supremacy alive in our communities across the country. This challenge perseveres even when the intention is only goodness - when we in the end share values around humanity and community that Du Bois spoke to. I can only hope the legacy, courage and honor of this great thought leader and activist prevail and those with the privilege and power persist with their intention and values to honor and celebrate him in the face of discomfort. Without conflict, discomfort and tension, we cannot transcend and outgrow white supremacy.

Failing to Prioritize the Safety of People of Color

I was recently asked by a journalist to respond to the white nationalist movement in my state. I declined and expressed concerns for my safety and that of my family. I noted the potential negative impact a statement from me could have on racial justice and immigrant advocacy work going on. Instead I shared a resource for folks looking for help as county-wide coalitions have formed to keep people of color and threatened populations safe. While the resource I offered was acknowledged as important, it was not shared. The priority was not maintaining the safety of people of color. That is the privilege of white supremacy: to prioritize intent over impact on people of color for a sense of “doing the right thing.”

To the white ally who experiences these stories as a pinch on the arm that wakes you up for a few moments, I urge you to let them be more. These are scary, often traumatic human experiences that have emotional, psychological, and health costs. This is everyday white supremacy, and it has a real cost for every person of color.

In 2016, in a conversation with OnBeing, activist Ruby Sales shared: “Love is not antithetical to being outraged… There are two kinds of anger… redemptive anger [moves you to] transformation and human up-building. Non-redemptive anger is [what] white supremacy roots itself in.” Once we make this distinction, we understand that we have to do more than protest and march; we have to act differently in the most quiet of moments and in our most personally valued relationships.

What do we value more than wealth, privilege, and security? I think it is love as Ruby Sales, bell hooks, and Dr. Martin Luther King describe love. And in order to have an abundance of what we love (connection, fulfillment, safety, justice, and joy), we must look at what we have to give up. Equity requires a give in order to receive. This kind of love takes grit (deliberate practice), resilience (ability to fail and keep trying), and love in action (a belief in our collective humanity). Thankfully, we can practice this at any moment. I know it is how we transform and transcend all forms of white supremacy.

Gwendolyn Hampton VanSant is a well-recognized thought leader in diversity leadership and community organizing for racial justice. She is the Founding Director of Multicultural BRIDGE, a community-based educational nonprofit in Berkshire County, Massachusetts, and the Equity and Inclusion Team Lead at Imagine Philanthropy, a strategy consulting firm that uses a gender and social justice lens. In addition to providing award-winning cultural competence trainings, Gwendolyn is a frequent speaker and long-time activist. In 2016, Gwendolyn served as the Founding Director of Equity and Inclusion at Bard College at Simon’s Rock. In spring 2017, Gwendolyn spearheaded the county-wide campaign and coalition "Not in the Berkshires" and helped craft and pass her town’s Trust Policy, a step towards a statewide Safe Community Act. In 2015/2016 she was recognized as a “Berkshire Trendsetter” and was named one of her county’s most dedicated and creative social entrepreneurs. Gwendolyn has founded several initiatives based in the principles of equity and justice, the inherent dignity and worth of individuals, and our interconnected web of humanity. She serves on the board of UU Mass Action Network.