Not In Our Town & Safe Schools: A Report from Iowa | Not in Our Town
Skip to main content

Not In Our Town & Safe Schools: A Report from Iowa

Originally published by the Iowa Association for Supervision and Curriculum Development 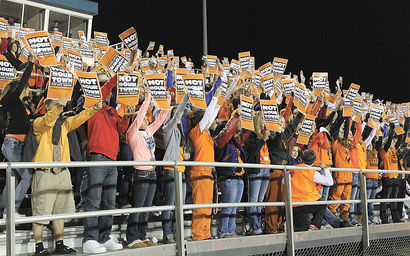 The city of Marshalltown understands the importance of collaboration. For years the community and its school district have risen to embrace challenges and work together. In the spring of 2012, Mike Schlesinger, Publisher and General Manager of Marshalltown Newspaper, LLC, gathered key community leaders together to address the issue of bullying and hate. Based on a common concern about tragic consequences resulting from bullying that have been reported in Iowa and across the nation, Marshalltown decided immediately to be proactive and spread a common message that this type of behavior is not acceptable in our town.

What is now known as the Not In Our Town: Marshalltown Project, immediately caught the town's attention and gained support. As a federal Safe Schools/Healthy Students grant recipient, the Marshalltown Schools were in a position to strengthen the district's efforts to improving school climate and safety measures. Businesses, local churches, local foundations, and service agencies quickly joined the initiative to spread a message of hope. Much has been accomplished in a few short months and ideas for the future of this initiative abound. To date, the following captures some of the events and activities:

As a community, Marshalltown believes very strongly in this message of hope and acceptance. As a result, the national Not In Our Town organization has taken notice. The Working Group and PBS (public broadcasting) have taken a keen interest in Marshalltown's work to this point. What makes the story unique is that no tragic event has occurred in Marshalltown. The community has chosen to keep in that way!

In:
not in our school
PBS
anti-bullying
community responses to hate
marshalltown
iowa