Not In Our School Week: Reflections from an English Teacher | Not in Our Town
Skip to main content

Not In Our School Week: Reflections from an English Teacher

"One of the reasons why I like NIOS Week is that it reminds staff and students that it’s OK to actively participate in what’s going on around you, and that you should be supported for standing up against something that isn’t right." 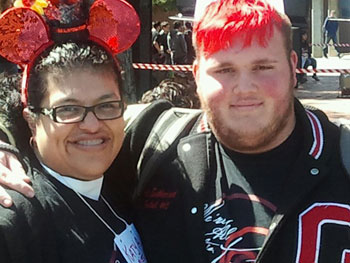 This week Gunn High School in Palo Alto, Calif. held its annual Not In Our School Week. Kristy Blackburn, English teacher and Not In Our School program coordinator, reflects on the first day of Gunn’s 2011 NIOS Week.

Greetings again from Gunn High School! Today was our kick-off for Not in Our Schools Week, and we had a very successful kick-off event in the quad at lunch, not to mention a huge number of students wearing the “We’re All in it Together” T-shirts that we handed out last week. The vibe on campus was great today, accentuated by the first sunny day in a few weeks.
Today was also the day for English and World Language teachers to do a lesson revolving around NIOS ideas. In my English classes today, I used the “What Would You Do" videos as a way to start a discussion about why people choose to intervene or not, an idea that can be applied to both the books my students are reading (Charles Dickens' A Tale of Two Cities and Ernest Gaines' A Lesson Before Dying). Daisy Renazco and I had created a lesson plan that can be used for most of the “What Would You Do” videos, which helped quite a bit in framing the discussion because it got students to think about what they would do in the situations they watch.
I sometimes forget as a teacher that many of my students are constantly wrest- 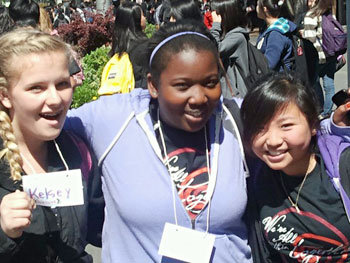 ling with the issue of when and how they should intervene in situations they feel are wrong or make them uncomfortable. The class discussion we had today, and the instances my students wrote about, reminded me that it is always worth thinking and talking about why we act the way we do.
One of the reasons why I like NIOS Week is that it reminds staff and students that it’s OK to actively participate in what’s going on around you, and that you should be supported for standing up against something that isn’t right. With an age group that is often really worried that they will end up being the next target if they step in, I think it’s important to make that idea explicit so they know they will have support from some of the adults in their lives if they do act.
After watching the video where this woman collapses in the street and the break-taking EMTs do nothing, many of my students talked about how surprised they were that so many people walked by a person who seemed so obviously hurt or in need without even reacting. Yet, when someone did stop, more often than not a crowd would gather and others would help try to revive the woman or keep her company.
The idea that there is strength in numbers is something we related back to A Tale of Two Cities—after all, the revolution is much more s 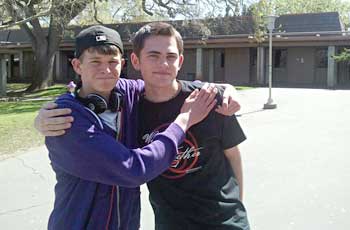 uccessful when there are more people involved instead of just one lone peasant. I think that’s a connection I’d like to make more clear in my classroom tomorrow—that Not in Our Schools Week is similar to involving more peasants in the revolution, because when more people on campus feel comfortable speaking up for what’s right, then people are treated the way they should be.
One of my fellow English teachers was talking to me about her experience with “What Would You Do?” today. At the end of her lesson, one of her students said:
"I think it's great we are learning about these things in this school. At my old school, which was in a violent and dangerous area, we never learned anything about this." Having these conversations with students is a valuable piece of what we do overall as educators, and I’m looking forward to seeing how the conversation continues to evolve this week.

In:
not in our school
Gunn