NIOT Marshalltown: Creating a Better City | Not in Our Town
Skip to main content

"I don't normally talk about racism because Marshalltown has been so good to me, but if people think it's not out there and hiding in those dark places, they are sorely mistaken. It stinks and it hurts every time ..." he said.

In the op-ed below, Marshalltown Times-Republican Managing Editor Jeff Hutton attends the career fair, but his conversations with students take a turn toward bullying.

I was fortunate this week to participate as a presenter during Miller Middle School's Career Fair activities. It was a chance for different professionals from Marshalltown to talk to seventh- and eighth-grade students about possible careers.

I will concede my presentations with the students didn't go as planned. We often times went off topic to talk about a wide variety of things going on at school and in Marshalltown. 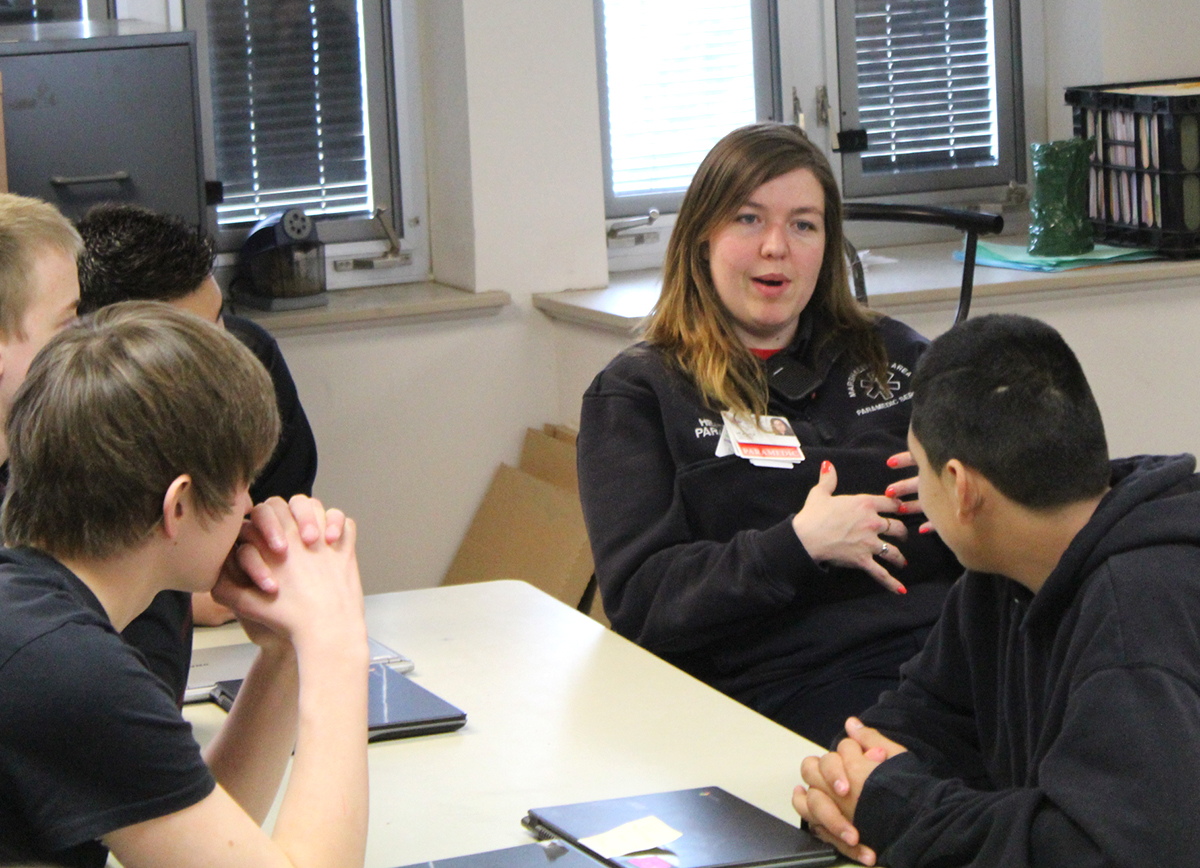 Credit: Bobcat Headlines. Marshalltown EMT/Paramedic
Heather Becthold speaks to students at Miller Middle
School during a career fair on March 18. The fair spanned
four mornings at the school and drew dozens of area
professionals, who spoke on their profession​.

During one of those presentations, however, the students were quite candid that many of their friends and others continue to be bullied at school or targeted on social media, despite efforts the community has made over the past few years to curb those attacks.

For many, it's a case of skin color or ethnicity. For other students, they are being harassed for their sexuality or being "different."

The students, in some cases, said their concerns were not being addressed or are completely ignored by some of the adults they are seeking guidance from.

As it turns out it's not just young people. Sometime even adults don't always feel welcomed in our community.

As progressive as I believe Marshalltown is, clearly there is still a great deal of work to be done in terms of reaching out to everyone who lives here.

Many folks in the Hispanic community have told me they still feel isolated; others have been downright discriminated against.

A friend of mine, a lifelong Marshalltown resident, recently said he was impacted by racism the other day, simply because of his skin color.

"I don't normally talk about racism because Marshalltown has been so good to me, but if people think it's not out there and hiding in those dark places, they are sorely mistaken. It stinks and it hurts every time ..." he said.

And it isn't blatant racism.

Often, the comments are subtle.

For example, "What are you?" is a question sometimes posed to those of mixed race. It may seem like a harmless question but if you're at the end of the question, it's anything but harmless.

It's called "micro-aggression" and it refers to "brief and commonplace daily verbal, behavioral, or environmental indignities, whether intentional or unintentional, that communicate hostile, derogatory, or negative racial slights and insults toward people of color."

Look, the truth is Marshalltown IS a wonderful community and there are so many positives to share - overall I think we're doing a good job of communicating that to those around us.

But are we doing enough? Are we extending our hand to everybody?

Whether it's at school, the business community, our neighborhoods - eliminating prejudice and hatred means getting to know each other.

I know there are efforts that have taken place or are currently under way - Not In Our Town is just one example. But the conversation has to be an ongoing dialogue among those who really want to create a better Marshalltown.

We must be frank, honest and willing to hear things we don't want to think about.

You know, sometimes our "Iowa nice" attitude gets in the way of speaking directly about these issues. But if Marshalltown is going to be a model of how a diverse community can truly co-exist and thrive, we can't ignore the opportunities to talk about the issues that continue to divide.

My friend, after that frustrating encounter over his skin color, told me he will always love Marshalltown and has faith we can all come together as a more unified and welcoming community.

"Tomorrow will be a better day," he said.

This op-ed appeared in the Marshalltown Times-Republican. See the original here.

Learn more about Marshalltown’s Not In Our Town group.

In:
marshalltown
Not In Our Town
career fair
Miller Middle School