In early February the Memphis, TN City Council voted to rename three parks whose names are associated with the Confederacy and the Ku Klux Klan.

Renaming the parks would be a victory for racial equality nationwide, say local activists. Memphis resident Kennith Van Buren told The Huffington Post. “How can we have unity in the nation when we have one city, right here in Memphis, which fails to be unified?”

The Ku Klux Klan protested the University of
Mississippi's efforts to ban a racist chant in 2010.
Not In Our Town covered this protest and response here.

In response to the park renamings, the Ku Klux Klan has applied for a permit to hold a protest in Memphis on March 30. A representative told Action News 5, a local television station,  that he was expecting “thousands of Klansmen from the whole United States” to descend on the city in protest.

Memphis police are considering special guidelines for the rally, including prohibiting concealed weapons and not allowing participants to wear masks, according to The Commercial Appeal. Director of Memphis Police Toney Armstrong says he is anticipating high numbers of counter-protesters as well as Klansmen at the event.

This is part of an ongoing conflict that includes the Memphis City Council, the local community, and the state. Earlier this year, the council debated changing the name of Forrest Park, named after Confederate General and KKK Grand Wizard Nathan Bedford Forrest, and removing a statue and burial site of Forrest in the park.

According to USA Today, the state government in Nashville then attempted to prevent the changes by outlawing the renaming of public spaces named after military figures or events. 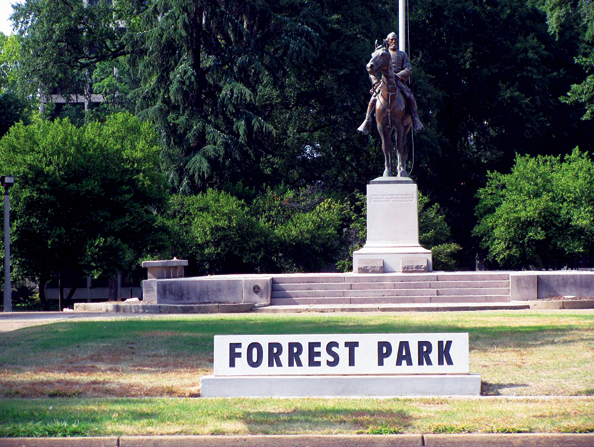 The proposed changes have caused disagreements within the city council. The Memphis Daily News reports that council members have disputed the extent of Nathan Bedford Forrest’s involvement with the Ku Klux Klan, while members of the public and the group Sons of Confederate Soldiers have argued that the renaming of Forrest Park is an attempt to erase the history of the South. Meanwhile, council member Myron Lowery has suggested renaming Forrest Park after Ida B. Wells, a civil rights and women’s rights activist, to better reflect the racial diversity of the city.

Forty-five faculty and graduate students from the University of Memphis have signed a letter in support of the renamings. One signee, Professor Aram Goudsouzian, told the council on Feb. 5, “No one is saying we should erase Nathan Bedford Forrest from our history books—our understanding of history. But a public park is not a history book. It’s a public space with a monument that suggests this person stands for values we celebrate as a community.”

Last year Selma, AL faced a similar issue when the group Friends of Forrest started to renovate and expand a monument honoring Forrest, which allegedly sat on public land. A petition asking the city council to stop the expansion attracted more than 330,000 supporters, and the city council halted construction in September 2012, according to CBS News.