ISU and Labor Leaders Tell Hate Groups "Not In Our Town" 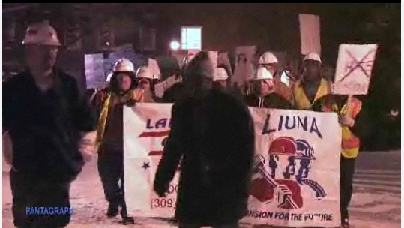 A cold, snowy February evening didn’t stop over 250 Illinois State University students from marching together at a unity rally in response to hate literature found in their community. The students were joined by over 50 members of Laborers Local 362, who wore their hard hats and carried union banners in support.

After the march, students and community members rallied at the University Student Union, where ISU Campus president Dr. Al Bowman spoke about the university’s ongoing commitment to diversity, and Not In Our Town: Bloomington-Normal leader Mike Matejka encouraged the marchers to keep the spirit going, and to speak up against everyday acts of intolerance. Watch the Pantagraph News video about the ISU march.

After KKK leaflets and racist graffiti were found in Normal restaurants and on the ISU campus, Carlin Daniels, a member of the ISU student group The Enlightenment, contacted The Working Group for ideas about how the community could respond. The Working Group’s Executive Producer Patrice O’Neill put Carlin in touch with Not In Our Town: Bloomington-Normal leaders, who helped raise awareness about the unity rally.

“I praise the students for being there, for coming together in unity, and for not being scared,” Matejka said.