Illuminating Charleston, One Year Later | Not in Our Town
Skip to main content 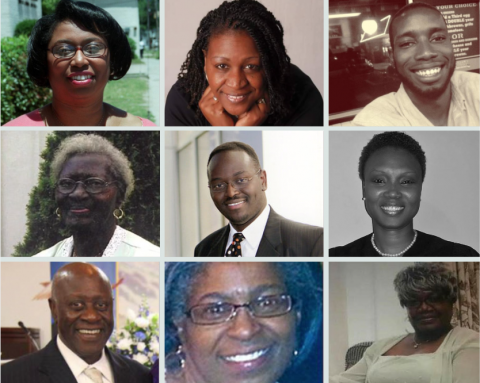 Victims of the 2015 Charleston church shooting

In a week punctuated by one of the deadliest hate crimes in modern US history, we also mark the anniversary of nine black lives lost in a racially motivated shooting. One year ago, on June 17, 2015, a white supremacist killed nine people as they worshipped at the historic Emanuel African Methodist Episcopal (AME) Church in Charleston, South Carolina. Today, we honor and remember their lives.

Remembering the Nine in Charleston

Below are the names and a brief description of each of the people who were killed at Mother Emanuel Church. Click here to see further messages of support and to leave your own. 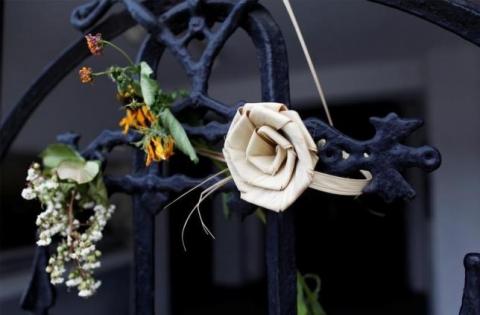 Descriptions compiled via NPR and various pieces by The Post and Courier in Charleston.

The Rev. Clementa Pinckney, 41: Pinckney was a state senator and the senior pastor of Emanuel AME Church, described by The Atlantic as “The preacher who tried to heal the wounds of Charleston.” Pinckney was married to Jennifer Benjamin and he was the father of two daughters. He had served in the South Carolina state Legislature since 2000, graduated from Allen University in 1995 and earned his master's degree in 1999 from the University of South Carolina.  On June 26, President Obama delivered the eulogy at Pinckney’s funeral. (Obituary)

Cynthia Hurd, 54: Hurd was a manager of the John L. Dart Library for 21 years. In 2011 she took over at St. Andrews Regional Library, which county officials said would be renamed in her honor. A Charleston County library spokesman said Hurd “spent her life helping people,” and she will be rememberd as such. All 16 branches in the Charleston area were closed after her death to honor her and the eight other victims. (Obituary)

The Rev. Sharonda Coleman-Singleton, 45: Coleman-Singleton was a pastor at Emanuel AME Church, a speech therapist at Goose Creek High School, and the coach of the school’s girls track and field team. Chris Pond, who coaches baseball at Goose Creek, said, “She loved everyone and always had a positive attitude about everything.” (Obituary)

Tywanza Sanders, 26: Sanders was working as a barber in North Charleston after graduating from Allen University in Columbia last year with a degree in business administration. He was the nephew of Susie Jackson, who was also in the church on Wednesday, and attempted to protect her before they were both killed. In a school press release, Sanders was described as “quiet with a warm and helpful spirit.” (Obituary)

Ethel Lance, 70: Lance worked as a custodian at the Emmanuel AME Church and the Gaillard Municipal Auditorium for roughly 30 years, but was attending Bible study as a faithful churchgoer when the shooting happened. Her daughter described Lance as a "strong woman who just tried to keep her family together," according to The Post and Courier. (Obituary)

Susie Jackson, 87: Jackson was a trustee of the church, a regular presence at Emmanuel Bible studies and was once a member of its choir. She was also the cousin of Ethel Lance, and an aunt to Tywanza Sanders. “She was a loving person,” said her son, Walter Jackson.  (Obituary)

Depayne Middleton Doctor, 49: A mother of four who sang in Emanuel's choir, Doctor began working as an admissions coordinator at Southern Wesleyan University in Charleston last December. University President Todd Voss described her as “always a warm and enthusiastic leader,” and her friend Jackie Starkes, who sang in the choir with her, remembered Doctor’s voice as one that “could move the very depth of your heart.” (Obituary)

The Rev. Daniel Simmons, 74: A former pastor at Friendship AME Church in Mount Pleasant, SC, Simmons survived the initial attack last Wednesday but ultimately died in a nearby hospital. According to the The Post and Courier, he was a member of Emanuel’s ministerial staff and regularly attended Bible study. "We love and we miss him," said his granddaughter Ava Simmons. (Obituary)

Myra Thompson, 59: Thompson was an active member of the church and a former teacher in the Charleston County School District. One of her students said of Thompson, “She was stern, yet loving and wanted you to succeed.” Thompson is survived by her husband Rev. Anthony Thompson, the vicar of Holy Trinity Reformed Episcopal Church in Charleston. (Obituary)

In this interview in the NY Times, Polly Shepard and Felicia Sanders who survived the attack and family members of those who were killed talk about  what they have experienced in the last year.

"Forgiveness is not for the person. The person doesn’t care whether you forgive him or not. Forgiveness is for you. Forgiveness is growth. If you don’t have any forgiveness in you, it makes you stagnate. " Felicia Sanders, a Charelston survivor who shielded her 11 year old grand daughter from the attack.  Reported in the NY Times

A Bridge Between Charleston and Orlando

Pastor Betty Deas Clark, the first woman Pastor of Mother Emanuel AME church, was on her way to Washington DC to join the First Lady and Oprah Winfrey at the White House where she was to be honored at a gender equality event. Instead, Rev. Deas Clark travelled to Orlando to be with the victims, stating that she needed to be of service to the people of Orlando. Reflecting on the one year anniversary of a racially charged mass shooting at her church, Deas Clark said, "Mother Emanuel is very resilient, as a people we bounce back, we're moving forward. Yes we do have days when we cry, we have days when we're still yet mourning, but for the most part we're moving forward."

President Obama gave one of the most memorable speeches of his administration at the funeral for Rev. Clementa Pinckney, the pastor and state senator who was one of the victims slain in Mother Emanuel. The President spoke of gun control, race relations, and tapping into the "reservoir of goodness."  Addressing both the Charleston community and the country writ large, the President continued, "If we can find that grace, anything is possible. If we can tap that grace, everything can change." To conclude the eulogy and lift up each of the Emanuel nine, Obama led a congregation of over 5,000 churchgoers in a soulful rendition of Amazing Grace.

Honoring the legacy of those who were lost

Last year a young woman asked, “What will happen when the funerals are over and the media leaves town? Will the Emanuel 9 be forgotten?” Our response today, is that they will not be forgotten. We've compiled a series of discussion questions for faith, community, and educational groups to use with our short video "Charleston: The Days After." Additionally, there will be a series of vigils and events in Charleston commemorating the anniversary. 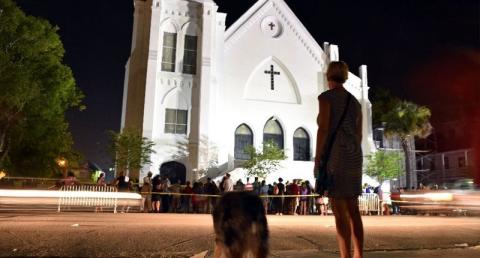