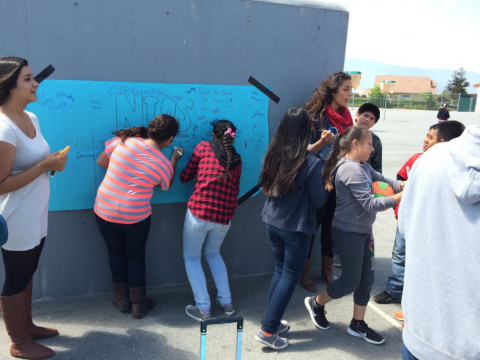 Not In Our School is proud of the multi-year work at Soledad High School in Soledad, CA. In this profile, two NIOS leaders reflect on the anti-bullying work they continue to push in their school district—Aidee Aldaco, a staff member at Soledad High, and Robert, a student who helped found Soledad NIOS with his older brother Alex, a current NIOS intern.

How does your NIOS club operate?

With the Help Intervention Coordinator and five high school seniors, Soledad NIOS aims to target bullying and harassment issues within the elementary school sites. We operate on a low budget, but use simple activities and technology to build positive friendships and habits. With high school students as mentors to the younger students, the younger pupils are more interactive than they would be with an adult. This allows the NIOS club to discover the issues within the schools and work to resolve them.

How did you start the mentoring project with the elementary schools?

In the 2013-14 school year, the NIOS club officers decided that the high school students were not receptive to the messaging, and felt that outreach needed to start at a younger age level in order to tackle the issues before students reached high school. From information provided by one of the NIOS club officers, we discovered that there was a troubling issue at one of the elementary schools. From there we reached out to the principal and created a Powerpoint presentation and simple activities to impact the students.

Can you describe the process you did in the schools?

What kind of success did you have?

The schools in Soledad Unified School District have been very supportive and welcoming. There was a lot of positive publicity, which has increased the demand for our support. There was also positive feedback from the the elementary students, such as “thank you” letters they sent to us. It was rewarding for our members as well, who learned positive friendship building and giving back to the community. 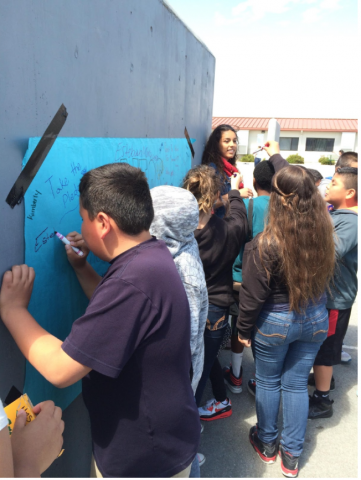 What were your challenges?

Some of our biggest challenges are that our NIOS group has no budget for materials or transportation. It’s also difficult to schedule meeting times for the NIOS members due to other commitments. Additionally, the current bully policies and reporting protocols in our district often conflict with what we want to achieve.

How do you plan to keep the efforts moving forward since many of your NIOS leaders are graduating this year?

We have already recruited juniors and underclassmen who have participated in our school visits and are being trained on how to run the club.

What advice do you have to other student-led NIOS groups?

Don’t be discouraged by student behavior. Don’t feel like your efforts are pointless if you don’t see immediate change because in the long run, you are changing students’ lives. 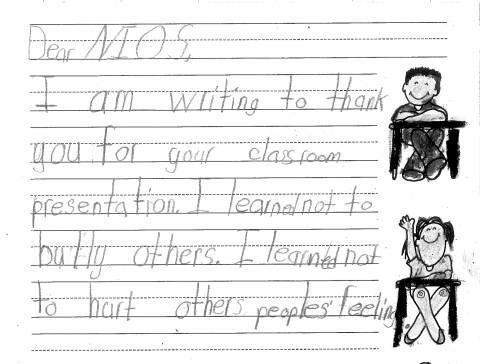 We are thrilled to have reconnected with Becki [the NIOS Director] and the NIOS organization. We feel supported and feel confident with the resources provided.

There was a 6th grade student at our first school site, who had been dealing with social scrutiny & harassment. During our workshop, he was one of the few students who stood up and talked to us about his experiences in school and developed a close relationship with his high school leader. That helped him raise his self-esteem. We later found out that he expressed to his mother how inspired he was by our efforts and that he felt more comfortable socializing. His mom reached out to the principal thanking her for bringing NIOS to the school. One of our later school sites had a group of girl scouts who were inspired by our message and decided to start NIOS within their troop.

You can make a difference in your school by starting a Not In Our School campaign on your campus.