Bringing Community Together: Jesse Castaneda Takes On Silicon Valley | Not in Our Town
Skip to main content

Submitted by Anonymous (not verified) on December 14, 2011 - 3:36pm
One highly motivated and persistent person can help spark significant action in a community.
That's what Jesse Castaneda did in Silicon Valley. Because of his actions, key civic leaders in Santa Clara County renewed their commitment to prevent hate crimes. Since August 2011, Castaneda has been screening the film Not In Our Town: Light in the Darkness  with civic leaders, teachers and immigrant groups. While many leaders in the area have been aggressive about addressing hate crimes, the new film, and Jesse's persistence helped shed light on  the dangers of anti immigrant violence, and encouraged people to come together to find new solutions. 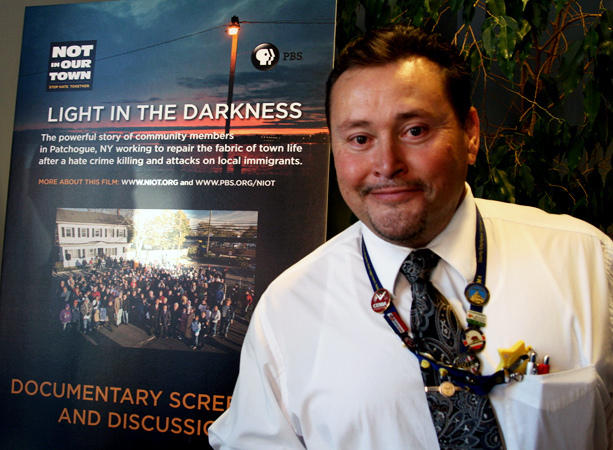 Although the activist works full-time in health care, is chair of an immigration reform coalition, and is expecting his first child in a few months, Castaneda has found the time and energy to use the latest Not In Our Town film to help galvanize his community.

He was first introduced to Not in Our Town at a screening in Silicon Valley several years ago, but became highly motivated when he saw Light in the Darkness, the story of a community responding to the hate crime killing of a local immigrant.

Still, Castaneda says he responds to Not In Our Town not just because it speaks to attacks on immigrants, but because an attack on one, is an attack on us all.

“I was so moved by the story about the man who was murdered in Mississippi, and how the community was trying to come together,” said Castaneda about the June hate crime killing of James Craig Anderson, a 49-year old auto worker, by several teenagers. “That’s what I look for from Not In Our Town.”

He has organized two Light in the Darkness screenings co-sponsored by the Women’s Network, Minority Coalition, and United Latinos at UFCW union halls in Hayward and San Jose, Calif. He has also been responsible for the September screening at San Jose State University and at the Mexican consulate in San Jose.

Castaneda’s work bringing together immigrant communities with local law enforcement and civic leaders couldn’t be more important or timely. Recent FBI figures report that two-thirds of hate crime victims nationally are Latino, but many claim that a great deal of mistrust remains between the immigrant community and law enforcement, in part because of programs like Secure Communities (S-COMM). As a result, Latinos may be less likely to report crimes.

“It is hard to get anyone to meet in the middle and listen to the humanistic side of immigration,” Castaneda told Not In Our Town earlier this year. "Light in the Darkness helps temper down the hate and rhetoric and makes the immigration conversation easier.”

Visit the Light in the Darkness page to learn more about the film, find resources or to host a screening near  you.