Berea, Ky. Comes Together After Threat to Interracial Couple | Not in Our Town
Skip to main content

Berea, Ky. Comes Together After Threat to Interracial Couple

Damon Dunson and Melanie Stamper of Berea, Ky. woke up one morning last week to spray-painted racial slurs on their vehicles. 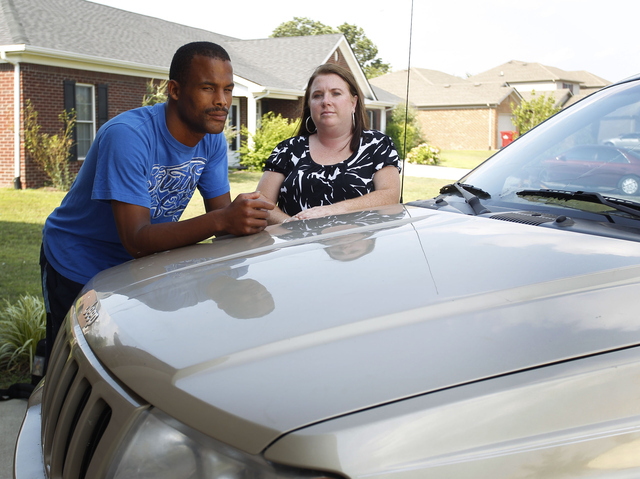 Damon Dunson and Melanie Stamper.
Photo from Lexington Herald-Leader.
Click through for story.

"I was angry, but at the same time I knew whoever did it was ignorant," said Dunson, who is black. "They spelled the n-word three different ways," said Stamper, his girlfriend, who is white.

The message left on Stamper's Jeep, she said, told her to get out of the neighborhood.

But the couple said that in the aftermath of the incident, people in Berea have rallied around them, inviting them to a potluck to discuss discrimination and creating a fund to help pay to repair the vehicles.

"It was a pretty bad shock to many of us in the community," said Mae Suramek, who set up the fund at U.S. Bank. "Many people wanted to make it known as a community that this would not be tolerated."

Berea police Lt. Daniel Brewer said that he was investigating the July 7 incident as a bias crime and that there were "persons of interest" but no suspects.

"It's a cowardly, deplorable action," Mayor Steven Connelly said in an interview Wednesday. "Our community is and should rally around to support the couple and also to make it clear that this is not to be tolerated or considered acceptable."

Suramek said donors had given $500 by Tuesday toward the restoration of the cars. A body shop owner in Nicholasville has offered to donate his time and labor for Stamper's car, but Stamper must pay for the materials.

"People just got really excited and rallied around the one tangible thing they could do to show Damon and Melanie" that the bias "was not a common feeling in the community," said Suramek.

Stamper said the generosity has helped them deal with the fact that vandals targeted them in such an ugly way.

"I could not believe it," said Stamper. "I was mad. I was angry. I was hurt. You just wouldn't imagine the emotions that run through you."

The day after the incident, about 40 concerned citizens invited the couple to a potluck to talk about "how horrible this was" and "to come up with some concrete ways to combat this and publicly denounce this," said Suramek.

One way, said Suramek, will be to ask faith-based leaders such as ministers to pass along a message of tolerance to their congregations.

Another, she said, will be to ask the Berea City Council at its meeting Tuesday "to not look at it as an isolated incident" but to consider that there might be other issues of racism and discrimination.

Suramek and Stamper said they and a group of concerned citizens asked council members to create a human rights commission that would investigate all acts of discrimination on Tuesday.

The council has been debating whether to create a human rights commission and whether to extend the jurisdiction of a local human rights commission to include discrimination based on sexual orientation. That's the option Suramek said she supports. Berea also has been considering an ordinance that would protect gay, lesbian and transgender people from discrimination in the workplace, housing and public accommodations.

Stamper told Not In Our Town she continues to be in awe of the outpouring of community support, "We want to teach kids in school, to say we're not going to tolerate this. When the mayor visits you, when people bend over backwards, it means so much." Suramek said she will be meeting with Berea College Interfaith Coordinator Katie Basham  and Unity Dinner organizer Jenny Ceesay to discuss ways to promote tolerance and utilize Not In Our Town resources over the coming weeks.

For the full Lexington Herald-Leader article, visit "Berea rallies around interracial couple whose vehicles were painted with slurs"

amazing paragraph, I have got much clear idea about
from this piece of writing.|
}