Not In R’ House

When uninvited guests began showing up at the University of California at Riverside campus engaging in what they call “confrontational evangelism,” university staff and students struggled with what to do with their disruptive and upsetting message.

“They carry big signs that basically say, ‘all of you are going to hell.’ Everyone, ‘Hindu, Christian, Catholic, all of you are going to hell,’” says Assistant Dean of Students Alfredo Figueroa. “They spew this stuff and it draws a crowd and our students start to react to it. They have video cameras, and I tell our students, ‘that’s their game. They’re hoping that one of you loses your cool and hits them, because then it becomes about our students being violent.’” 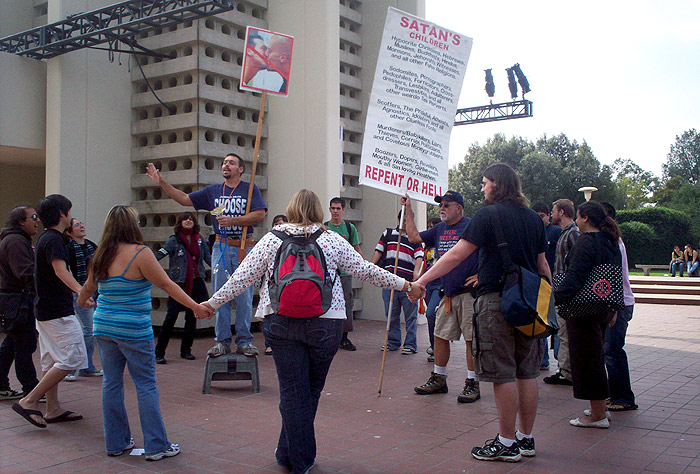 The visitors are part of a small, loosely affiliated group sometimes called the “campus preachers” or “street preachers” that show up at universities and colleges all over the country. They include George Edward Smock of Columbia, Missouri, better known as “Brother Jed,” and others from as far away as Florida. They first started targeting UC Riverside, the nation’s fifth most diverse university, in 2006. Since then, staff estimates the group comes to campus about five times a year.
“[They] stand at the bell tower and say hateful things to our LGBT students,” said Stephanie Croney, a UC Riverside student. “Many of the students are outraged and hurt.”
To interrupt the hateful atmosphere the campus preachers aim to create, staff members from the UC Riverside Dean’s Office formed the Hate/Bias Response Team and created the Not in R’ House campaign.
“We made t-shirts for the staff and l keep them in the office,” says Figueroa. “We tell them, ‘when we call you, like superman, change into the shirts!’”
When the preachers arrive, the Hate/Bias Response Team brings Not in R’ House action kits to help students respond in a unified and peaceful way. The kits include posters, buttons, hate incident report forms, and handouts with suggestions about what people can do. Students are encouraged to form a “moving circle of love” and surround the hate speakers and hide them from view. They can also turn the speaker’s words into a fundraiser for diversity groups on campus. Each time a speaker utters a slur, students are instructed to collect a dollar. The money is then donated to a group on campus. 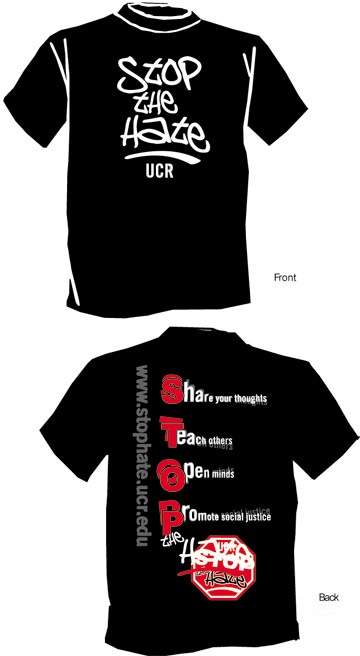 “We talk [to students about the] need to utilize your own free speech rights when someone else is using their free speech to spread hate,” says Jen Miller, UC Riverside student development educator. “We talk about the fact that just because something is legal, it is not okay, and we as a community can respond.”
The Hate/Bias Response Team also documents and makes public incidents of hate on campus, as well as providing victims and witnesses advice on their recourse. When a student reports an incident, it may be pursued with a police investigation or warrant disciplinary action under the University’s conduct rules. Other times, members of the Hate/Bias Response Team may follow up by offering support and resources to the victim.
“We want them to feel supported,” adds Miller. “If it is a crime, we want them to tell the police, and if it is a conduct violation we want them to report it. Sometimes an event is one thing, sometimes it is all three, so we want to offer the full range of options.”
The team has more than 20 representatives from police, staff and campus organizations. Stephanie Croney is the student representative.
“I can help because I have more understanding of what is going on with the students,” she says. “Students tend to respond better to me because they see me as a friend trying to help.”
Croney also helps to put together every January “Stop The Hate Week,” a series of student-lead events. Last year, “Stop the Hate Week” included an art contest, educational workshops on hate bias crimes and incidents, and film screenings addressing LGBT, gender, immigration, and a host of other issues. The week also featured a screening of The Working Group’s “Not In Our Town Northern California: When Hate Happens Here,” and “Not In R’ House,” a UC Riverside-produced documentary featuring students talking about how they can address hate on campus.
“I feel like this is an issue that few people want to talk about and yet it affects so many,” says Croney. “I want to see UCR grow as a community where all the students feel comfortable.”
Brian Lau contributed to this report.
Project:
Not On Our Campus
Local Lessons:
Not in Our School and Youth Organizing