Finding Support in the Wake of Murder

A Family Member of a Transgender Victim Speaks Out

Q & A with Imelda Guerrero

Editor’s Note: In 2002, Gwen Araujo, a 17-year-old transgender teenager, was brutally beaten to death by a group of young men from Newark, California, when they discovered her transgender identity. Not long after her disappearance, her body was found in a shallow grave in the foothills of the Sierra Nevada mountains. As her family grieved the violent death of their loved one, the case captured the attention of the national media. NIOT Producer Kelly Whalen, who told Gwen’s story in “Not In Our Town Northern California: When Hate Happens Here,” spoke with one of Gwen’s aunts, Imelda Guerrero, about the support the family needed and received through the tragic experience.

NIOT: Describe the immediate community response to Gwen’s murder and how your family dealt with being in the spotlight?
Imelda Guerrero: We were bombarded with letters and flowers -- just tons of support from not just the close community of Newark, but the whole Bay Area, and even out of state. The support was phenomenal, but it was very overwhelming. The local media was pretty much there every day for at least four months after Gwen was killed, and we were being bombarded with numerous national television interview requests. We wanted our story out there for people to be aware of the transgender issue and how she was violently murdered, but we didn’t know what we were getting into. And we didn’t know who was going to be scandalous or sensational in their coverage and who wasn’t. We were able to get [Victim’s Right Attorney] Gloria Allred into the picture, and her stepping in really did help a lot. She filtered through [the media requests] for us, and kind of directed everything so that it allowed us to focus on things like Gwen’s funeral service. 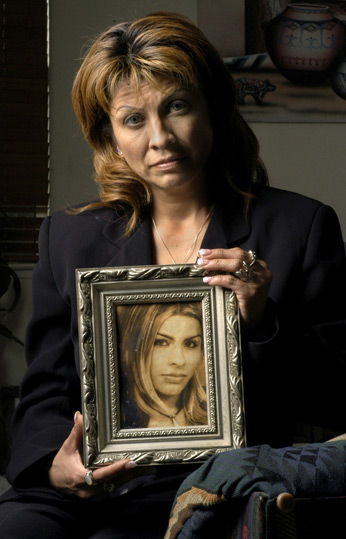 NIOT: Tell us about some of the messages of support that were most comforting as you mourned Gwen’s death? What advice would you give others who want to support a victim of hate and their family?

Imelda Guerrero: The personal stories were probably most helpful. There were a lot of mothers writing in about how they didn’t realize that their children were transgender and that they felt bad because of the way they treated them -- forcing them to dress in the opposite gender of what they believed they were. They wrote about how Gwen’s story helped open their eyes and made them realize they need to love their children no matter what and let them be who they are. Those stories really resonated with me, and we still get a lot of them and they’re very heart warming to read.

I think that if people feel touched by the story of [a hate crime victim] I encourage them to reach out to the family in whatever way you can. Write a letter. Send an email. Sometimes websites are set up for victims, where you can leave a message. We set up an online memorial site as a tribute to Gwen and received a lot of messages there.

NIOT: Your family received support from advocacy groups like Community United Against Violence (CUAV) and the Transgender Law Center. How did they help?

Imelda Guerrero: The LGBT community was very, very, very supportive helping us understand that Gwen was transgender, and that we weren’t alone and that there were a lot of people out there that are transgender. CUAV was there from the very beginning and through both trials. They were just amazing. [CUAV staffers] Connie [Champagne] and Tina [D'Elia], they were with us the whole way through and they became very good friends of ours. Christopher Daly with the Transgender Law Center was also there through the two trials and also a very big help. He also helped us legally change Gwen’s name [from her birth name Eddie to her later chosen name Gwen.]  It was just kind of amazing the way that everybody helped us through it. It was almost like we had fallen down and we were being picked up by everybody.

NIOT: Your family endured two trials of the young men charged with Gwen’s murder, after the first one resulted in a mistrial. How did you get through this period?

Imelda Guerrero: Being there in the courtroom, I think it makes a strong impression on the jury and maybe the judge. But whatever the consequence of us being there, we felt we had to. We were going to be there to be Gwen’s voice and to be her presence. I was a full-time realtor at the time and able to move my schedule around so that I could be at the trial every single day. I only missed a few days out of both trials and felt obligated to make sure that I didn’t miss any details. My sister Sylvia [Gwen’s mother] would sometimes come too, but I knew that most of the time it was too painful for her to be there, so that was another reason why I felt I needed to be there.

The hardest thing was having pictures of her body up there, and then listening to the defense attorney put her down, and bash her name, and talk about some of the things that she did that made her sound like she was a horrible person. I understand that they are doing their jobs and trying to [defend] their clients, but that was hard to hear. Some days you’d have to either become numb to it or step out and take a break.

NIOT: Another case involving a transgender murder victim, Angie Zapata, recently went to trial in Colorado. Your family reached out to the Zapata family. Why?

Imelda Guerrero: We were just compelled to and felt we needed to reach out to them. We wanted them to know that we were there for them if they needed any support or advice, and for any questions they had as far as the investigations and prosecution went. When we were going through both trials [with Gwen’s case] we got very close to the prosecution’s investigator, and we pushed her, just to keep her on track so that little details weren’t missed. We gave that type of advice to Angie’s family as well, and shared what we thought they could expect at the trial.

NIOT: It’s been seven years since Gwen was killed. Tell us about how your family has dealt with her loss over the years.

Imelda Guerrero: It still hurts to think about Gwen every single day, and we miss her all the time. The pain is still there, but you just learn to live with it. We’re a pretty big family and we have each other to lean on, and it helps us cope. But just the thought of how she was killed, that never goes away.

Every year, around the anniversary of her death, and around her birthday, we do something as a family, just to let her know we’re never going to forget and that she’s in our hearts and our thoughts everyday. Last year, we went to Tahoe and found the area where her killers buried her. It was intense, but something we just had to do and I think it was another closure for my sister, Sylvia. We prayed, released balloons, and talked and hugged and laughed together.

We also participate in the Transgender Day of Remembrance every year. We go either to the San Francisco event or the one in San Jose. We try to switch off every year and we’ll speak at the event. That’s something we’re going to do forever, because we need to honor and remember Gwen, but also all the other fallen victims.