Unity in the Community (Manassas, VA) | Not in Our Town
Skip to main content

Unity in the Community (Manassas, VA) 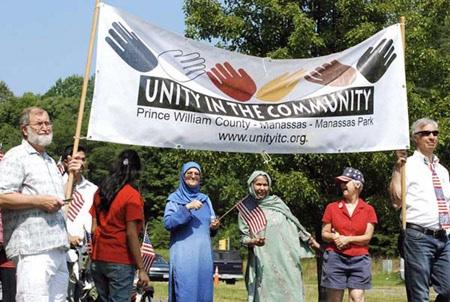 We are proud of our continuing film series, a collaborative effort with George Mason University, including four films focused on immigration through the fall term.  Post-screening discussions are led by students from the university's Institute for Conflict Analysis and Resolution.  Each year we observe the International Day of Prayer for Peace. A local mosque hosted the event in 2008, and this year the interfaith gathering is hosted by Temple Ner Shalom.   We helped to organize and serve as the fiscal agent for Prince William Study Circles, which encourages dialogue and understanding between diverse neighbors, and is a collaboration of several organizations and George Mason University's Prince William Campus. We recently released Words of Compassion: Supportive Statements on Immigration [www.unityitc.org/document/Compassion.pdf]. The collection is also available for purchase.

Prince William County continues to feel the effects of passing some of the country’s most aggressive anti-immigrant initiatives. In 2007, the county board adopted a resolution to curb immigrants’ access to public services and to increase immigration enforcement by local police. The new law sent an unspoken message that it was acceptable to target the immigrant population, question their presence, and generally make them feel unwelcome. Implementation of the county resolution was eventually reduced in scope, but many individuals continue to see the immigrant population as a threat and an assault on life in Northern Virginia and will take any opportunity to affirm prejudiced points of view. Police officials say that they’ve reduced immigration enforcement since the county first passed the 2007 resolution, but recent incidents, studies and citizen sentiment suggest rigorous enforcement continues. A local anti-immigrant group, "Help Save Manassas," distributes literature and recruits locally at events like the county fair. There has been a rise in hate literature distributed by the KKK and other supremacist groups. Two Hispanic residents have been murdered in recent years in what appear to be hate motivated crimes. We are also disheartened by a recent decision to build a detention facility for undocumented immigrants in nearby Farmville, VA, an economically depressed community. We find it tragic that the relief of the economic hardship in the community is based on the arrest, detention and removal of immigrant residents.

Our most immediate stories deal with immigration issues since Prince William County has been a center for aggressive anti-immigrant activity. We have had successful programs co-sponsored with George Mason University (public forums, and a continuing film series) and are currently involved in the development of community based study circles to rebuild community dialog. We also partner with the Virginia Interfaith Center for Public Policy.

We enjoy good relations with George Mason University, the local police departments and many area churches.