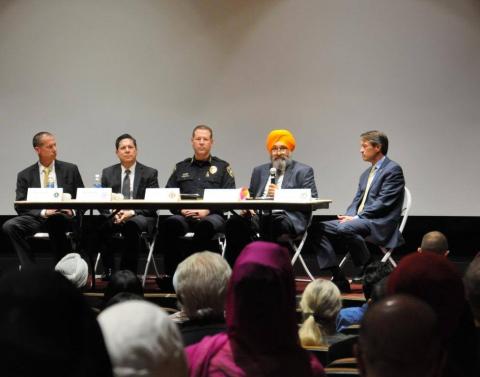 (After the screening of Not In Our Town's "Waking In Oak Creek" at the University of the Pacific in Stockton, California on Tuesday, September 23, 2015, a thoughtful and compelling panel discussion ensued where it was stressed that all community members must get involved to prevent intolerance and hate.  Seated from left to right, Benjamin Wagner, moderator and U.S. Attorney for the Eastern District of California, Bhajan Singh Bhinder, Chief Eric Jones, Stockton Police Department, Ron Freitas, Assistant District Attorney for the San Joaquin County District Attorney's Office and Robert Tripp, Supervisory Special Agent, F.B.I., Sacramento Division.) 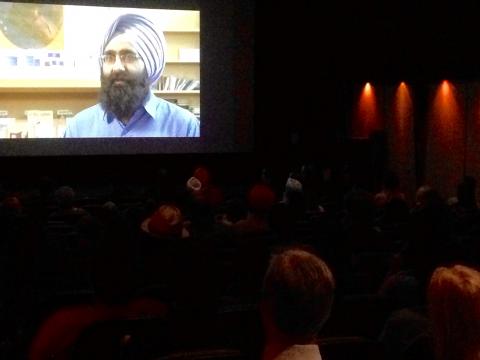 Members of the community watch a special screening of "Waking in Oak Creek"
at the University of the Pacific in Stockton, California on September 23, 2015.

A special screening of Not In Our Town’s “Waking in Oak Creek” was held at the University of the Pacific in Stockton, California on September 23, 2015. The screening was sponsored by the U.S, Attorney’s Office for the Eastern District of California, the Sacramento Field Office of the F.B.I., the San Joaquin County District Attorney’s Office, the Stockton Police Department and the Stockton Gurdwara Sahib in conjunction with Not In Our Town. “Waking in Oak Creek” profiles a suburban town rocked by hate after six worshippers at the Sikh Temple of Wisconsin are killed by a white supremacist. In the year following the attack, the mayor and police chief lead the community as they forge new bonds with their Sikh neighbors.

After one of the deadliest hate crime attacks in recent U.S. history, the film highlights a community and law enforcement agency working together to overcome tragedy, stand up to hate, and create a safe town for all. After the screening, a powerful and informative panel discussion ensued focusing on how to build stronger communities through diversity and understanding.